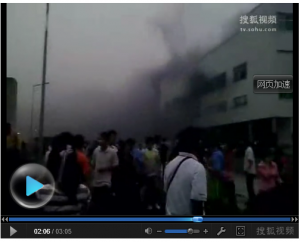 A third Foxconn worker has died from injuries sustained from the blast at Foxconn’s Chengdu plant. The which is plant located in Chengdu and is still under construction when a blast ripped through the building injuring 15 other employees, has now stopped production while Apple and Foxconn make a thorough investigation in what caused the explosion.

Preliminary reports say that a build up of “combustible dust in a duct” is to blame.

Foxconn have also reportedly shut down production at similar factories in China to conduct safety evaluations and prevent another explosion from occurring.

Workers interviewed at Foxconn factouries have reported that they are constantly breathing in Aluminium dust which is created during machining process. It has not been confirmed if this Alloy dust and the recent explosion are connected.

Next China Mobile Confirms Next Generation iPhone To Be 4G