The first of the new breed large battery THL phones has just gone on sale with a special international introduction price of just $169.99.

The tech world has been a buzz with news of the new THL range, which comprises of two of the most thoughtfully designed smartphones we have seen from the company for years.

The first to launch is the THL 4400 (the little brother to the THL 5000), which boasts a huge 4400mAh battery for long life, and OTG so you can even use the spare battery juice to charge other devices. Other on board features include energy-efficient specs such as the quad-core MT6582M processor, 5-inch 720 display, and 1GB RAM. 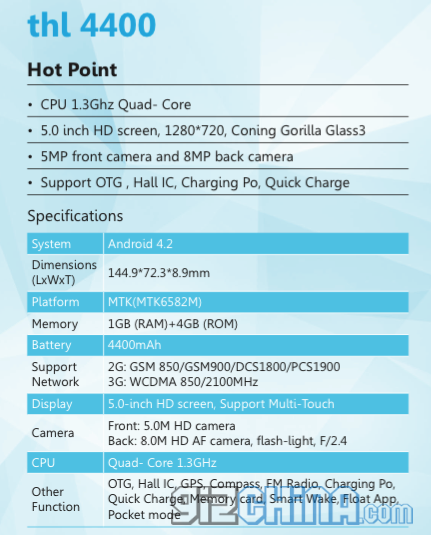 A wide-angle front 5 mega-pixel camera is a welcome addition to any phone at this price, let alone one with a battery of this size, as is the rear 8 mega-pixel camera, Bluetooth 4.0 and Gorilla Glass 3 display.

Previous Xiaomi readying to launch Redmi 1S, Note and Mi3 in the Philippines