At $110 the Dingding SK3 Pro is a very low-cost phone, but is the low-cost enough to warrant a purchase. We take a quick look in our initial hands on of this budget phone.

You may remember the Dingding SK3 Pro from a post we had a few days ago stating that specifications showed an option equipped with up to 4GB RAM! Although this is an option at the factory, the first retail model of the phone is a more down to earth version with quad-core processor and 1GB RAM. 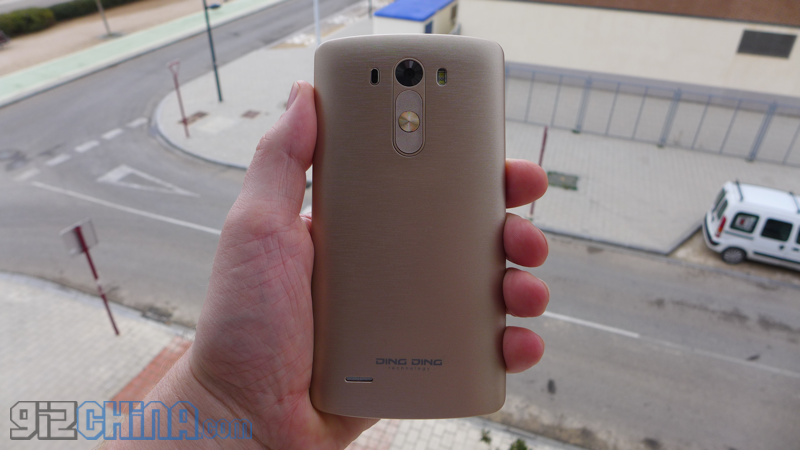 Taking a look at the hardware there are a few areas where you might be a little concerned. For example there is no LTE support, the processor is a quad-core MT6582 and there is only 1GB RAM. In day-to-day use terms this means very little as all social media, browsers and email apps will run flawlessly on this set up, and gamers will generally spend a little extra on their phones.

What the Dingding SK3 does offer is a very well-built, comfortable and stylish phone! The design of the SK3 Pro is as close to the LG G3 you could get without actually having an LG logo on it. So it is a clone, but a very good-looking one, and one that will suit customers more interested in aesthetics and build quality than performance and LTE.

My brief afternoon hands on with the DingDing SK3 Pro has revealed that the device is nippy once at the home screen with just a little lag when entering the camera from the lock screen shortcut. The icons and settings are all very ‘LG’ in their appearance, but everything is easy to find and is where it should be. There are some small details I quite enjoy with the SK3 such as the overall look of system applications, system sounds and the fact that Google services and applications are all installed as standard.

The camera application, which operates the 13 mega-pixel main camera, is especially good-looking for a $110 smartphone, and has a shutter sound that doesn’t sounds like a paper bag being crumpled up.

The SK3 Pro is a budget phone and at $110 it would suit uses who just want something stylish and looks the part. It would make a great back up phone, or a phone that you can take during a night out and not worry about it spoiling your street cred (it looks and feels like an LG G3 after all) or being broken, lost or stolen.

Obviously we are going to need more hands on time with the phone to make a final comment on it, but from our short time with it and passing it around the office it does feel like one of the better made $110 phones on the market, throw in the HD display and 13 mega-pixel camera and heart monitor and it’s not a bad device for the right person.

Next Subor bring us one step closer to bezel-less phones