Mediatek are currently promoting their next generation MT6797 Helio 20 SoC to manufacturers revealing more details of the chipset.

Mediatek are courting Chinese phone makers in an attempt to lure them over to using the next generation Helio 20 in flagship devices rather than the Qualcomm Snapdragon 810.

2015 has been a great year for Mediatek so far, with their 64bit chipsets performing well and finding their way in to Chinese and international brand phones, a trend they hope to continue with the MT6797 Helio 20.

We’ve already posted details of the Tri-Cluster, 10 core processor, but a new comparison table against the Snapdragon 810 gives us an easy reference for the full specification of the chipset.

As previously mentioned the MT6797 will run a small, medium and large core ranging from 4xA53 at 1.4Ghz to 2xA72 at 2.5Ghz for more intensive use. This new table also confirms that the MT6797 will be made on a 20nm process to create a smaller and more efficient chipset. 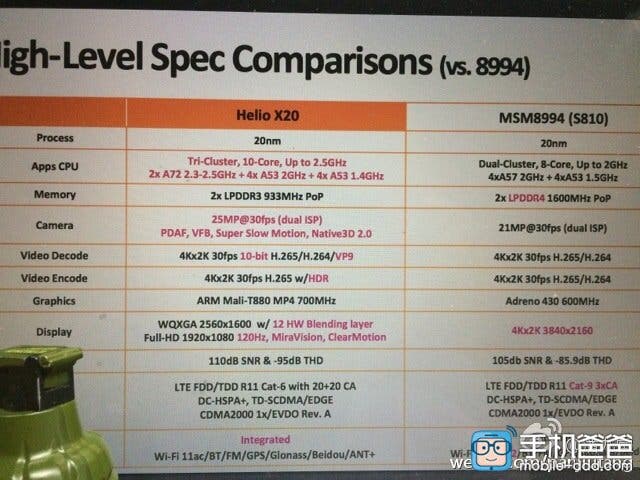 While the MT6797 Helio 20 does look like one formidable processor the Snapdragon 810 still has a few feature highlights. Cat 9 LTE being the most important but there is also support for higher resolution screens and LPDDR4 memory.

Helio 20 MT6797 processors should start shipping to phone manufacturers in Summer with phones reaching stores with the chipset by late Autumn/Early Winter.