The launch of the OnePlus 2 is still a few months away, but OnePlus CEO Pete Lau has already been discussing hardware with fans on Weibo.

Lau posted that the OnePlus 2 will receive a Snapdragon 810 processor once launched in Q3 of this year. Fans might react thinking that an 810 chipset in a phone so late in the year seems like an odd choice, but economically its a sound idea. OnePlus can wait for prices to drop while offering high-end performance.

Speaking of price, when fans quizzed Lau over the price the OnePlus boss replied that 2499.99 seems like a reasonable price after one poster suggested the figure. At current exchange rates that would mean a USD price of $403. 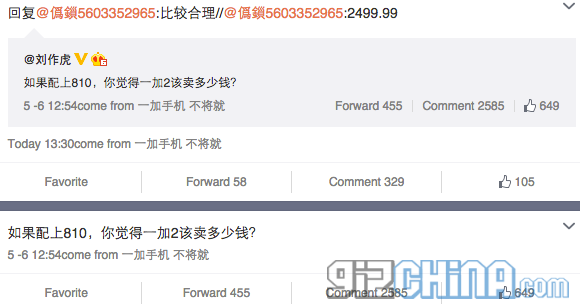 With launch still a while away fans of OnePlus have already started to create their own OnePlus 2 concepts such as the video below by Sahanan Yogarasa.

For OnePlus fans that wanted a smaller device, there is still hope as other OnePlus phones have been rumoured for release also.