After piling on the pixels with the Meizu MX4 Pro, Meizu bosses have now taken a change in direction and confirm a 1080 panel will be used on their next phone.

For the foreseeable future all Meizu phones will abandon the use of 2K panels and focus on 1080 screens. The news mirrors Meizu’s desire to become more Apple-like in their approach to phone design and specification.

Bosses state that users shouldn’t just be concerned with hardware parameters and should look at the user experience as a whole. They go on to say that even the best CPU’s can’t take full advantage of 2K panels and a 1080 screen is still more than up to the task of living on a flagship phone.

If we look back at the history of Meizu we can see that this is actually nothing new for the company, and instead of moving forward to new goals they are actually taking 2 steps back. For example the Meizu MX3 sported features that weren’t deemed ‘flagship’ at the time of launch, in the same way iPhones don’t match Android flagships on paper.

It appears to us that Meizu used the most recent product launches as a means to boost Meizu’s fan base and popularity, and are now moving back to their original focus. But these switches in direction aren’t great news for the end user, who will soon get bored with Meizu changing direction with every gust of wind. 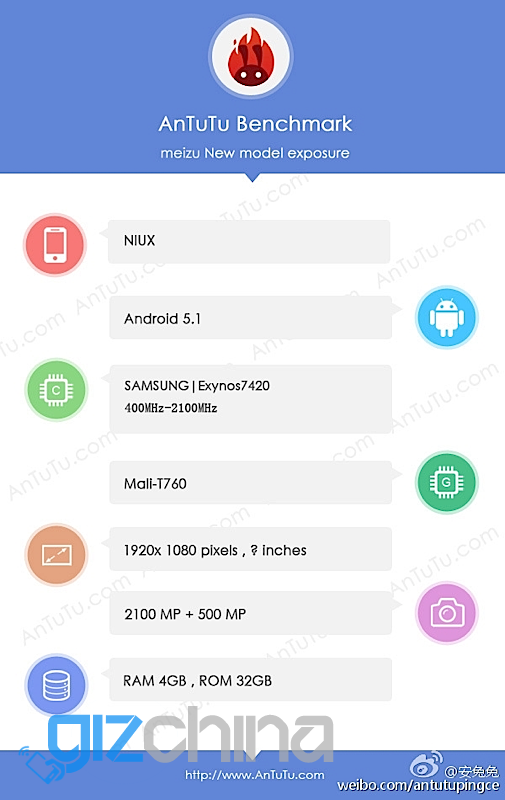 Back to their next phone. The upcoming Meizu flagship is believed to be called the Niux. The phone will come with a 1080 display, and use a Samsung Exynos 7420 processor and either 3-4GB RAM. Camera specifications will remain similar to current phones with a 5 mega-pixel up front and 21 mega-pixel camera on the rear.

Next Yu Yunique leaks hours before launch, is a $72 Cyanogen OS phone