Had your hopes set on a 4.7-inch Meizu Pro 5 Mini as the small screen flagship of your dreams? Well sorry because it’s not going to happen.

So it appears that Meizu were actually set to release a flagship phone with a smaller form factor but now those plans have been canceled! Why? Well Meizu are stating that their intended supply in Taiwan has been affected by the recent earthquake and stock that they were planning on using has been damaged. The disaster would set the Pro 5 Mini plans quite some time, so Meizu have simply decided to ditch the idea.

We’ll that’s what HuangZhang and Li Nan have said on Weibo anyway. 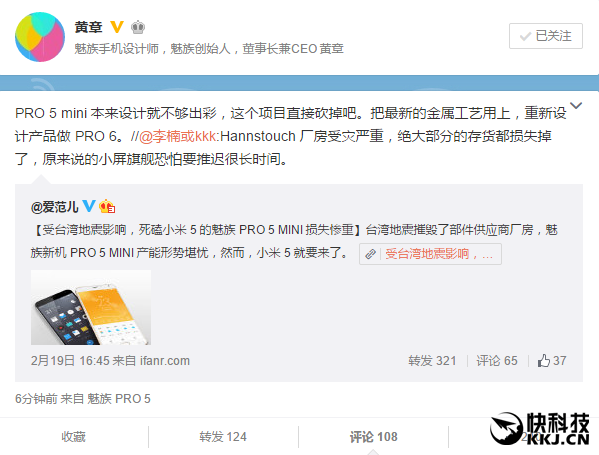 This sounds a little off to us though. If Meizu had already got the screen stock confirmed we assume tooling and the production line for the Pro 5 mini were in place too. Surely they could have found another screen supplier, or was their screen size and ratio a little different from the norm like original Meizu phones?

So the Meizu Pro 5 Mini is no longer going to happen that’s official, but we do know a Pro 6 is in the making and who knows perhaps we will get a Pro 6 mini instead?

Next This is the Xiaomi Mi 5 (Specifications, Price)