Going Pro is the way to go for most Chinese phone makers and its time that the hardy Redmi range goes the same way with a new model launching on the 27th July.

You can’t have missed the rumours, leaks and TENAA details of Xiaomi’s latest Redmi device over the past few weeks, well the latest is that the phone (due to launch on the 27th July) will be named the Xiaomi Redmi Pro.

The name details comes from Xiaomi’s own Weibo account which posted an image with the launch date and ‘Pro’ name yesterday. 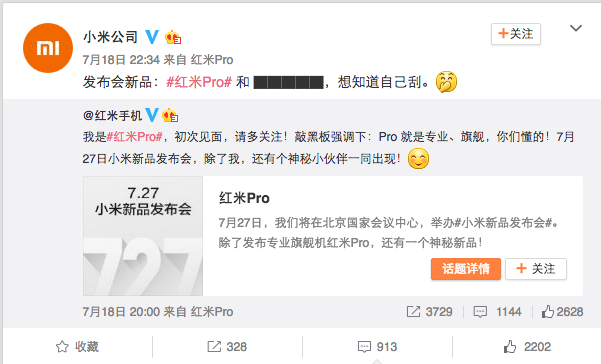 As for the hardware well it looks like two versions of the phone could be released (at least) with one model having a Mediatek Helio X20 chipset, while an alternate version has been sighted with Snapdragon 652. Other options will include the amount of RAM 3-4GB and internal storage.

From images the Redmi Pro looks to have an all alloy metal body with brushed finish. Early news suggested that the phone might have a dual rear camera, but now it appears that it will instead feature a 13 mega-pixel camera and rear fingerprint scanner.

What we find most interesting though is how similar these specs are to the Meizu MX6 launched yesterday, and how we expect the Redmi Pro to be seriously more affordable.

Next Huawei Mate 8 ripping up the rules with 2K display