The Vivo X9 and it’s larger variant are two devices that can’t seem to get a break. The devices have once again been leaked, this time on a promotional poster for both the devices, which confirms a bunch of things about the soon to be revealed phones.

For starters, while we were spot on about the display of the standard X9 being a 5.5-inch 1080p panel, the X9 Plus’s display is only slightly larger at 5.88-inches, though the resolutions still remains the same, which is a shame. 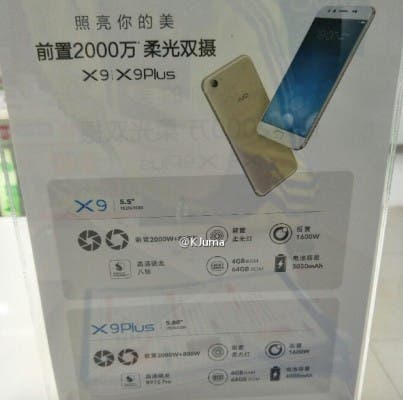 The leaks also confirm that both devices will ship with Snapdragon 653 processors, though the Plus comes with 6GB of RAM instead of the 4GB found on the smaller unit. The only difference aside from that is the battery size of the Plus being 4000mAh while the normal X9’s is 3050mAh.

The rest of the info consists of things we already know, like the 20MP + 8MP front facing cameras and the 16MP camera. The device will ship with Android Marshmallow, and is set to be launched on the 16th of this month.

Next Vernee fires up the sales carnival with discounts and giveaways