Oukitel’s been on a rise as of late. They’ve been pumping out devices at a fairly alarming rate, with device after device coming out almost monthly. So when they approached us to review one of their new devices, we were curious to see what they were like.

With that they’ve sent us their latest mid-range device, the Oukitel C5 Pro. Marketed as a rugged device with mid-range specs, it’s just popped up at my doorstep. So, is Oukitel biting off more than they can chew, or is the Oukitel C5 Pro going to surprise us all? Read my first impressions to see what I think.

Unlike many of the devices I’ve received recently, the Oukitel C5 Pro’s box makes it clear that this is a mid-range product. Nobody’s going to look at this box and expect something premium or expensive. But is that necessarily a bad thing for the device? Let’s take a closer look at it to see.

The box features a classic design, with an image of the device up front as well as some of its key selling points. There’s also an Oukitel logo up at the top of the front, with a nice orange font. The sides are the opposite with the logo in white on a bright orange background, which gives it a very clean look.

On the back of the device, we’ve got another image of the device and the logo, as well as the model name and some other specs. Opening the box reveals a slide-out cardboard shelf with the device in its silicone case on top, and the other accessories on the bottom. Overall, the box design is clean and functional, which contrasts the premium and svelte boxes of many other companies.

The accessories included are a simple silicone case, the power adapter, the microUSB charging and data cable and the essential el cheapo earphones. A simple bunch of inclusions, pretty much the standard package for most devices. They aren’t as solid or as well built as the one’s from Blackview or Honor, but they work well.

The Oukitel C5 Pro is an interesting device in terms of build quality. The device features a plastic rear that features a camo design, and it’s removable. Removing said rear reveals the dual sim card slots, the microSD card slot and the incredibly minuscule 2,000mAh battery. There’s also the speaker and its weird triangular grille.

Moving further on the rear, we find the device’s camera and LED flash. Flip the device over, and you find the device’s display, with the various sensors and front facing camera at the top. The capacitive touch buttons at the bottom are designed after the Lollipop buttons are sadly not backlit.

Going around the device is an aluminum band that holds the power button and volume rocker on the right. The top features the device’s microUSB port and 3.5mm headphone jack. On the bottom on the hand holds a singular mic, while the left is completely devoid of any ports or buttons. It feels nice and solid.

I haven’t handled that many Oukitel devices aside from the U8, but there’s one big problem with the build quality instantly. You see, the C5 Pro’s design on the rear may look interesting and gives the device a unique look, but there’s a reason it’s covered with a silicon case out of the box. It’s incredibly uncomfortable to hold.

While the rear panel feels incredibly tough and durable, the design on the back feels very… wrong. It’s not comfortable to hold and irritating to touch. I can’t fully describe the feeling, but I’ll do my best. It’s like cheap satin on a hard plastic sheet, with a texture on it. If you’re irritated by the sound of two spoons rubbing against each other, this texture will bother you to no end. 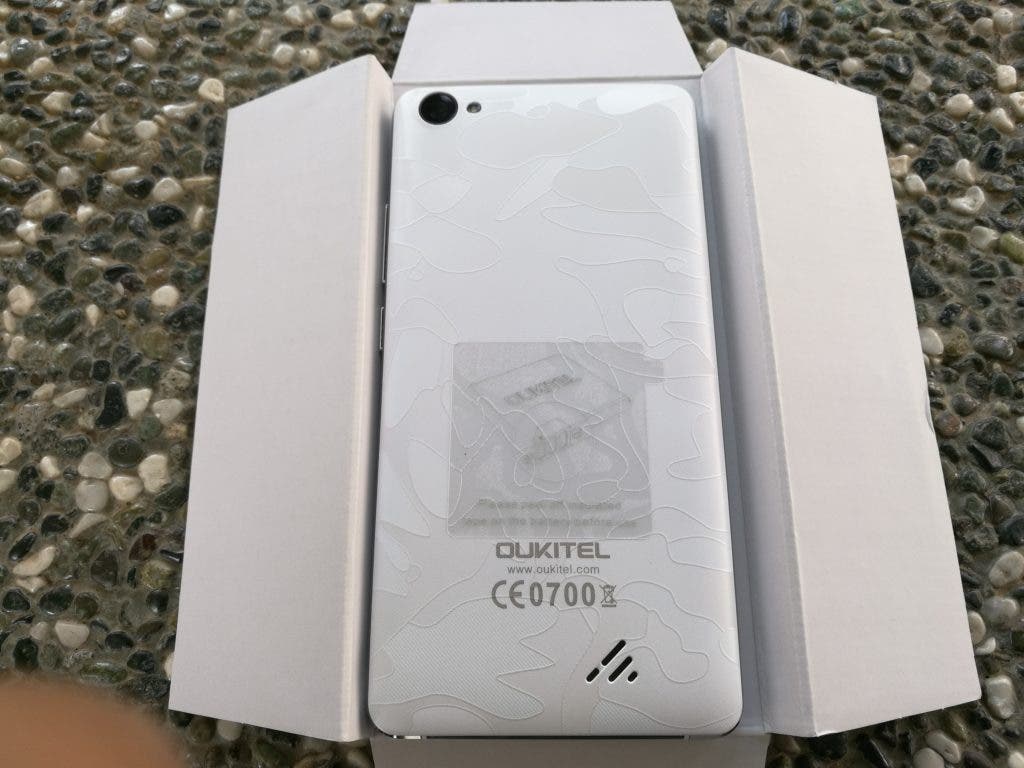 Moving on, turning on the display reveals a bright vibrant showing that looks pretty nice for the price. On closer inspection however, some flaws are revealed. For starters, there’s a noticeable gap between the display and the screen. It makes sense for a rugged device, but it does ruin the immersion. Sunlight visibility and brightness settings are quite satisfactory however.

Turning on the camera is also quite the disappointment. Unlike many devices these days where the pictures look decent until closer inspection, the C5 Pro’s camera is just incredibly grainy. Colors are accurate and vibrant, but the the details are completely ruined. I’ll take a look at the settings to see if there’s anything I could change about it.

And that’s about it for now. If you have any questions, feel free to ask them down in the comments section below so I can answer them in the Q and A section in the full review. For now however, this is what I have for you, and I hope you have a nice day.

Previous The Lenovo Tab3 8 Plus pops up on Geekbench