VKworld has released images of its new Mix+ phone while also claiming that the handset also boasts the world’s thinnest bezels.

We’ve seen plenty of smartphones with thin bezels, so many that it has become very tricky to know which phone has the slimmest bezels in town, but if we’re to listen to VKworld then its new Mix+ is the most slender of them all!

VKworld is claiming that it’s soon to launch smartphone, the VKwold Mix+, is designed with 0.8mm screen bezels which the phone maker tells us are the thinnest of any Android smartphone we have seen to date.

The phone’s design means that 88% of the face is made up of the 2.5D Corning Gorilla Glass 4 screen, what’s more, the screen is an On-cell IPS panel with HDR screen technology for crisp visuals while on the go even in bright sunlight. 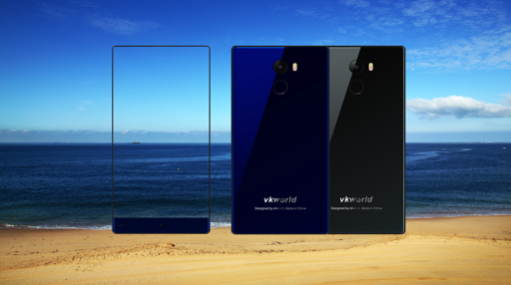 It’s early days yet, but it also appears the phone will have a simple single rear camera with dual LED flash, and fingerprint scanner. The phone comes in 2 colours, either gun metal grey or sapphire blue with a glass finish so that you can use the body as a mirror.

Keep tuned for more details about the Mix+ as we hope to have more information and pricing very soon.

Next Bluboo S8 with 18:9 display and Helio X30 coming soon

Mi Mix Fold goes official and it is all about innovation