The time is near guys, MIUI 9 is right around the corner. According to official information from the Chinese company we now know the way its phones are going to be updated. The first two phones to get the update are the Xiaomi Mi 6 and Redmi Note 4X, starting from August 11 (next week). 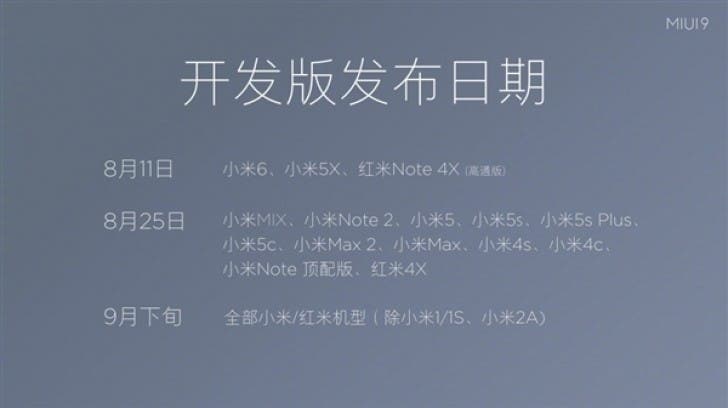 We also know now that the company plans to make MIUI 9 available to a huge bunch of phones two weeks after the first dispatch, on August 25. 12 phones will be part of this batch: the Mi Mix, the Mi Note 2, the Mi 5, the Mi 5s, the Mi 5s Plus, the Mi 5c, the Mi Max and its newer sibling the Mi Max 2, the Mi 4s, the Mi 4c and the Redmi 4X. A third wave of updates will come in September, and Redmi 2A and Redmi 1/1S will be in it.

I hope you remember that the upcoming MIUI 9 interface brings several bug fixes but also improvements to all Xiaomi devices: a new smart app launcher, improved image search, a smart assistant, blazing fast CPU acceleration mode etc. The update is focused on phones with Chinese ROM, but Xiaomi promised that it will soon be available to Global ROM variants.