We’ve seen more than enough number of leaked pictures, hands-on videos and rumors about the upcoming flagship SM-W2018 flip phone from Samsung lately, some rumors have it that the device will start selling in China sometime in Dec. Now, as per the latest report available to us, it appears we are inching closer to the official launch date of the device, as it has appeared once again in the news, but this time for passing through the official FCC website.

The FCC listing doesn’t reveal much about the device, though, apart from the model number and a few other connectivity features. The SM-W2018 flip phone is listed on the FCC document with the number – R38J906NX2E and will support ANT+, NFC, 4G LTE, Bluetooth 4.2 LE, WiFi, and others.

There have been a lot of leaks and hands-on images of the upcoming device in the last couple of weeks. If these rumors are to be taken seriously, then the Samsung SM-W2018 much like its predecessor will come with two 4.2-inch Full-HD displays with 1920 x 1080 pixels resolution, while it will be powered by the flagship Snapdragon 835 processor coupled with 6GB of RAM and 64GB storage. It is rumored to be powered by a 2300mAh battery and will run Android OS out of the box.

The Samsung SM-W2018 like other flip phones from Samsung will be exclusive to China and will come with $2,000 price tag. 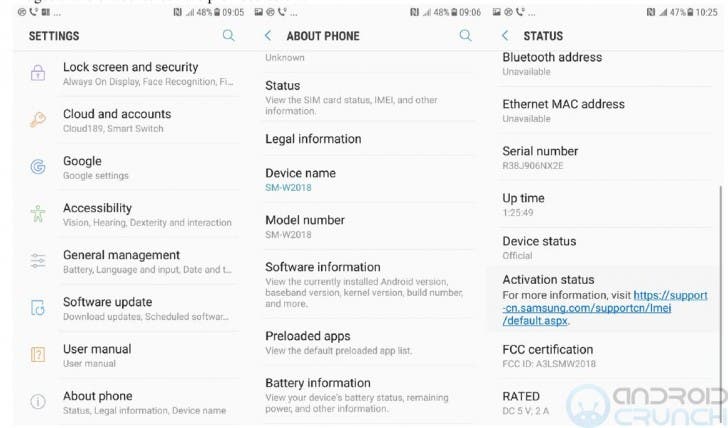 Sadly, Samsung mobile has not officially confirmed the existence, specs and release date of this device, so we advise you take the information contained here with a pinch of salt until the device is made official.

Previous Meizu To Rename Its Blue Charm Brand To mBlu