Electronics major Samsung has launched a new smartphone under its exclusive online “On series” in India. The handset dubbed Galaxy On7 Prime was earlier teased through various channels and is now finally official. 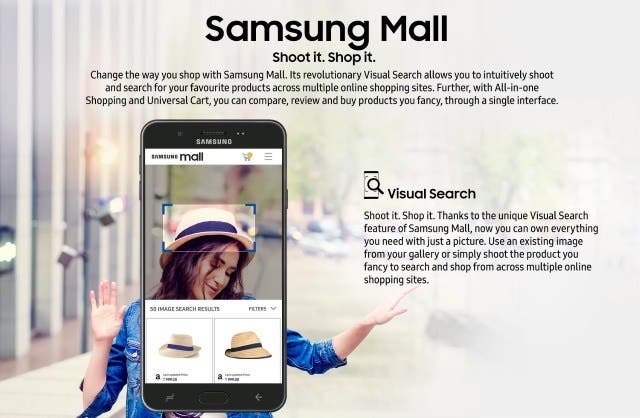 Samsung Mall is an app that allows users to search for products by taking snaps or image recognition via camera. In short, it’s like Bixby Vision but integrated with shopping apps like Amazon, Jabong, Shopclues, and Tata CLiQ.

As for Samsung Pay Mini it’s a watered-down version of Samsung Pay that will enable users to pay on-the-go.

As for the specs, the Galaxy On7 Prime sports a 5.5-inch Full HD screen, and Exynos 7870, and Android Nougat. Both the front and rear of the device feature the same 13MP camera with f/1.9 aperture. A 3,300 mAh battery is in charge of keeping the things working in the handset. If you’re interested in detailed specs, we’ll list a post sheet below.

The Galaxy On7 Prime comes in a 3 gig and 4 gig variant as you can see below. Prices for the two models is Rs 12,990 & 14,990 respectively. It can be bought online exclusively from Amazon starting January 20th.

Previous OnePlus customers credit card data may have been compromised