Chinese tech giant, Xiaomi, at the Redmi 5 launch event in India recently announced the availability of its Mi body composition scale in India. The device was announced earlier on in China and is an upgrade to the Mi Smart Weight Scale that is about three years old in the market now.

The Xiaomi Mi Body Composition Scale will go on sale in India today via mi.com in white color only at Rs. 1999. The device is a worthy upgrade as it comes with a handful of advanced features over the Mi smart scale.

The  Xiaomi Mi Body Composition Scale according to Xiaomi is now capable of analyzing up to 10 type of physical bodily data including the weight, BMI, muscle mass, basal metabolism, visceral fat grade, bone mass, water, body fat rate, body size and body score. It is also smart enough to identify and store up to 16 different users adults and children included.

Join GizChina on Telegram
It can be paired with Xiaomi’s Mi-Fit smartphone app using Bluetooth and can, therefore, send your data to the app with charts and timelines. 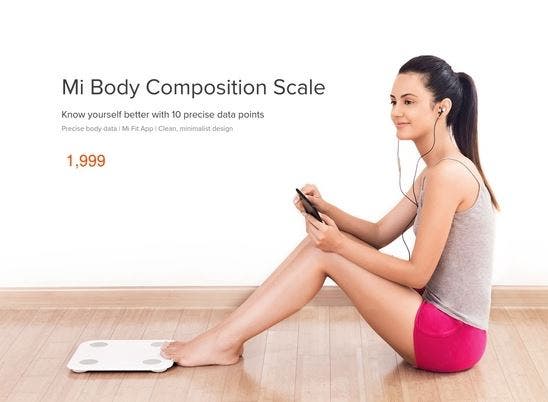 Made majorly of tempered glass with a well-polished surface, the scale can take a  maximum of 150Kg and can be used with wet feet. It is fitted with an LED display which only comes up about three seconds after you step on it and is powered by 4 standard AAA batteries which the maker claims can be used up to 8 months before replacement.