A few days back, JingDong made an appointment and began getting pre-orders for the first Honor-line notebook. The Honor MagicBook was announced on April 19. It’s considered to be one of the best high-end laptops coming our way from a Chinese manufacturer. So it’ been expected the MagicBook will provide good sales performance. Today, Honor officially announced the first sales report of this product. According to the data, there were sold 3000 units in one hour, 9000 units in 18 hours, and 11.000 units during the whole day. The overall sales amount exceeds 60 million yuan ($9.51). According to the official data, the Honor MagicBook has won the championship of JingDong notebook category sales, brand sales, and sales for a single day. 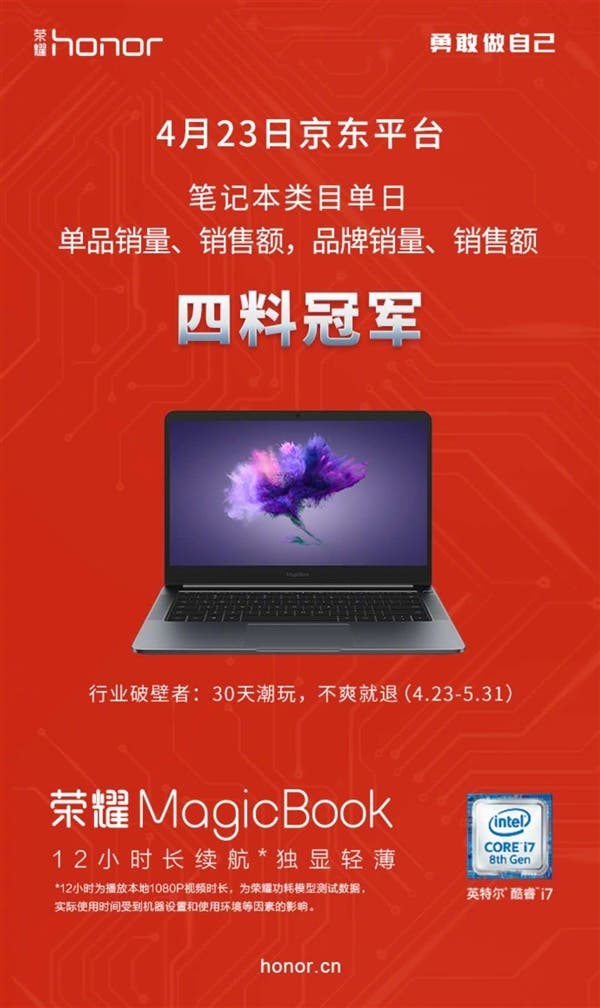 While many may wonder how this could happen as Huawei is not paying much attention to laptops, the Honor MagicBook is a true flagship sporting the latest generation of Intel Core i chips. But it is also great in terms of appearance and portability.

We have already managed to get acquainted with its key features. And we know it comes with a metal housing with the thinnest part of 9.6mm. It sports a 14-inch Full HD screen with 5.2mm narrowed borders and 81% of screen ratio. This display can also open at 180 degrees.

The MagicBook is packed with the latest eighth-generation Intel chips paired with an NVIDIA Full Blood MX150 GPU with a 2GB GDDR5 high-speed memory. Plus, it is equipped with a 57Wh battery, which is capable of providing up to 12 hours of Full HD video playback, 12 hours of web browsing, or 13 hours of working on documents.