Alldocube X, the only Android tablet that comes with a Super AMOLED display in addition to Samsung’s, was live on Indiegogo for crowdfunding a month ago, and now it has reached 6 times of its funding goal.

Today we learned from Alldocube officials some pretty interesting details about the hardware, the tablet did indeed achieve a score of 103865 in Antutu, meanwhile on Geekbench it scored 1636 in single core and 3941 in multi-core. For comparison, the Xiaomi mipad 3 with the same hardware only gets 76273 points on Antutu and 3460 in multi-core on Geekbench (source). In Alldocube’s favor there’s also the very affordable price tag of $219 (on Indiegogo).

Alldocube X aims to deliver a high quality entertainment performance with its Super AMOLED 2.5K display and AKM HiFi chip coming on board. Movies, musics and games will sound and look as good as you can get on a tablet.

This might not seem like a major difference, but Super-AMOLED displays carry many benefits over AMOLED displays because of the way these layers are designed:

1) The device can be thinner because the technologies for display and touch are on the same layer.

2) Higher contrast, plus the lack of an air gap between the digitizer and the actual screen, yield a crisper, more vivid display.

3) Less power needs to be supplied to a Super-AMOLED screen because it doesn’t generate as much heat as older screen technologies. This is due, in part, to the fact that pixels are actually turned off and therefore not emitting light/using power when displaying black.

4) The screen is more sensitive to touch.

5) Light reflection is reduced because there aren’t as many layers, which makes reading outdoors in bright light easier.

6) A higher refresh rate helps speed up the response time. 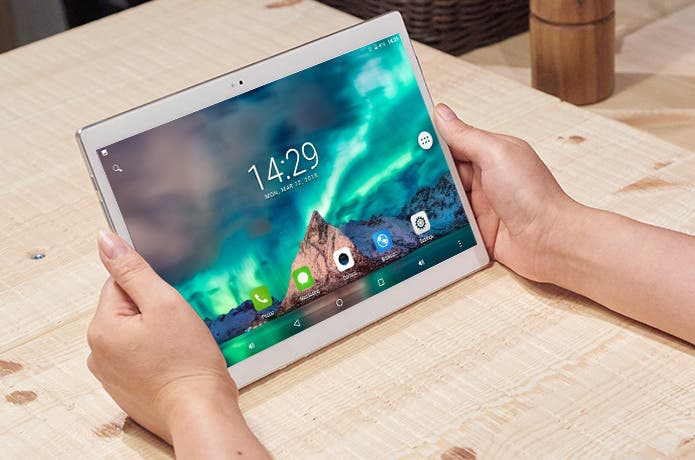 Besides, the Super AMOLED 2.5K display and AKM HiFi chip, the tablet is loaded with a Mediatek MT8176 chipset, has 4GB of RAM and 64GB of storage plus 128GB of MicroSD expansion slot in the offer. The Alldocube X runs on Android 8.1 Oreo out of the box, supports Pump Express 2.0 quick charge and comes with USB-C port and 8000mAh battery. Moreover, it has fingerprint sensor to unlock your tablet with just one touch and protect your data security.

You can now back the Allodocube X campaign over on Indiegogo with an up to 23% discount while the campaign is still on. Click here to learn more.