According to the International Data Corporation (IDC), worldwide smartphone shipments are expected to decline by 3% in 2018 before returning to low single-digit growth in 2019 and through 2022. While the on-going U.S.-China trade war has the industry on edge, IDC still believes that continued developments from emerging markets, mixed with potential around 5G and new product form factors, will bring the smartphone market back to positive growth.

Smartphone shipments are expected to drop to 1.42 billion units in 2018, down from 1.47 billion in 2017. However, IDC expects year-over-year shipment growth of 2.6% in 2019. Over the long-term, smartphone shipments are forecast to reach 1.57 billion units in 2022. From a geographic perspective, the China market, which represented 30% of total smartphone shipments in 2017, is finally showing signs of recovery. While the world’s largest market is still forecast to be down 8.8% in 2018 (worse than the 2017 downturn), IDC anticipates a flat 2019, then back to positive territory through 2022. The U.S. is also forecast to return to positive growth in 2019 (up 2.1% year over year) after experiencing a decline in 2018.

Though 2018 has fallen below expectations so far, the worldwide smartphone market is set to pick up on the shift toward larger screens and ultra-high-end devices. All the big players have further built out their portfolios with bigger screens and higher-end smartphones, including Apple’s new launch in September. In Q3 2018, the 6-inch to less than 7-inch screen size band became the most prominent band for the first time with more than four times year-over-year growth. IDC believes that larger-screen smartphones (5.5 inches and above) will lead the charge with volumes of 947.1 million in 2018, accounting for 66.7% of all smartphones, up from 623.3 million units and 42.5% share in 2017. By 2022, shipments of these larger-screen smartphones will move up to 1.38 billion units or 87.7% of overall shipment volume. 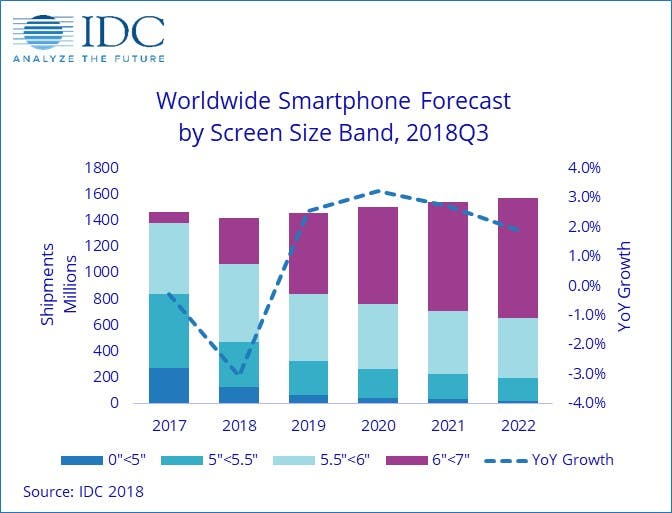