The Redmi Note 7 is scheduled to hold another sale on March 12 from 10:00 am and the company also revealed that it will release an announcement at the same time. As of now, all attention is geared towards the Note 7 Pro release in China which will take place on March 18 – same day for the release of the budget Redmi 7. However, this announcement slated for tomorrow was shared by Redmi’s president (Lu Weibing), Lei Jun special assistant, Wei Lai, and Xiaomi mobile phone product marketing director Qi Zhiyuan. It’s hard to speculate what this announcement will be. 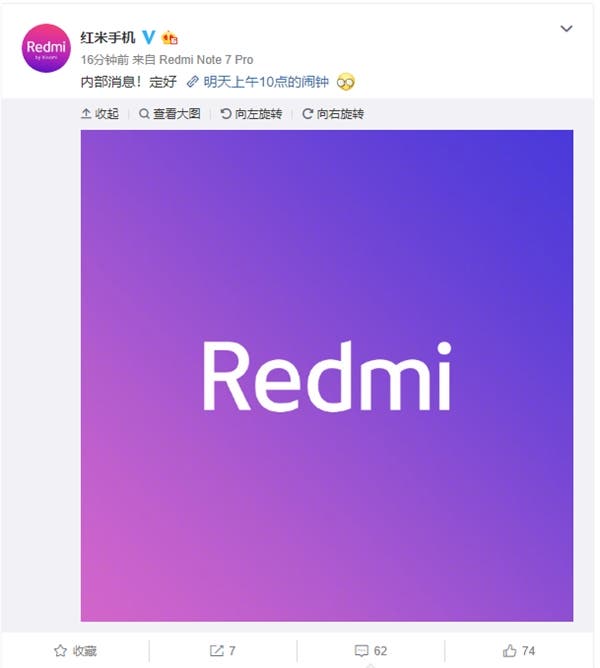 The Redmi 7 has passed through TENAA (model “M1810F6LE”) and according to the listing, there will be a very thin line between the Redmi Note 7 and the Redmi 7. All the devices released by Xiaomi’s sub-brand since its independence comes with a similar design and just a few hardware tweaks.

The Redmi 7 measures 158.6 mm x 76.4 mm x 8.9 mm and weighs 180g. It could come in eight color variants, including black, red, blue, pink, white, green, purple, and gray. The Redmi 7 uses a 6.26-inch display with a resolution of 1520 x 720 pixels and a screen aspect ratio of 19:9. This smartphone is powered by a Snapdragon 632 coupled with 2GB/3GB/4GB of RAM and 16GB/32GB/64GB of internal storage. The device will come with a 4000 mAh battery as well as a rear fingerprint sensor. In the camera department, it should have a dual rear camera with a 12MP+8MP setup coupled with an 8MP selfie camera. It is expected to boot MIUI 10 based on Android 9 Pie out of the box. As for the Note 7 Pro, the selling point is the upgrade to Sony IMX586 just as the Xiaomi Mi 9.

Next Yu Chengdong: Huawei could abandon Windows and Android if need be