Vivo is obviously leaving no stone unturned to one-up Xiaomi and Samsung which get the two top shots in India. The Vivo Z1 Pro landed in the country recently, the S1 launch is imminent, the Vivo Y90 is on the way, and now we hear that two new upcoming devices – the Vivo V17 and Vivo V17 Neo will join the bunch of VIVO phones in India soon. The V17 series might arrive just in time to replace the VIVO V15 lineup which has been reportedly discontinued.

A specific launch date has yet to be uncovered. But 91mobiles report that the launch might take place before Diwali festival season. As per a report by 91mobiles citing industry source, the Vivo V17 could launch with a pop-up camera. Interestingly the pop-up mechanism is said to house two front camera sensor with a Quad-camera setup on the flipside. Although the source isn’t so sure of the rear cam info. It is also plausible a VIVO V17 pro could tag along the regular V17.

Well,  that is all we know about the V17 at the moment. However, the same source has unearthed what could launch as a low-cost version of the V17. Dubbed the VivoV17 Neo, basic specs details of the said device have surfaced in a Google Play Console listing. 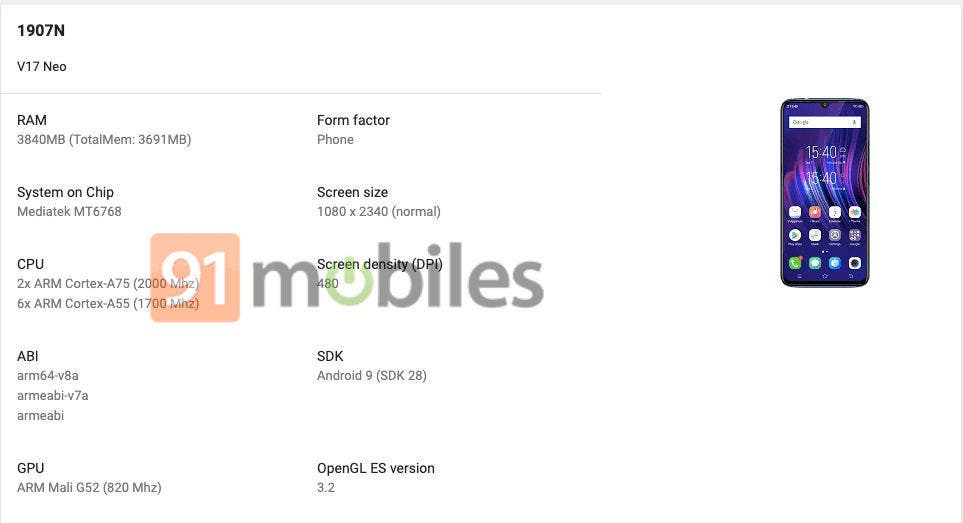 The Neo will offer an all-screen display with a halo notch with a high screen to body ratio, and a pixel density of 480DPI. The listing also tells us that the Vivo V17Neo is powered by MediaTek’s mid-range chipset Helio P65 with 4GB of RAM. It boots Android 9 Pie-based FunTouchOS out of the box.

Next Apple takes over Intel's phone modem arm for $1 billion