A couple of months ago, Oppo launched its new flagship lineup dubbed Oppo Reno offering 10x Zoom to the consumer. It seems like the smartphone maker is now planning to add a few more devices to this lineup in the coming months. One such device is Oppo Reno A which recently got leaked in almost all its glory. For those who’re unaware, the Chinese giant is going to unveil its Reno 2 series lineup in the coming days. Back to the Reno A, we now have the render images and the complete spec list of the smartphone.

Oppo Reno A to come with waterdrop notch and glossy design 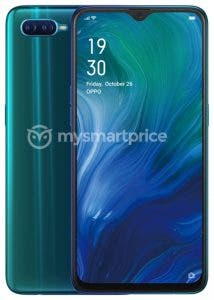 This leak comes courtesy of MySmartPrice. As you can see from the render above, the yet-to-be-launched Oppo Reno A looks like any other mid-range smartphone from the company itself. The front is dominated by a big screen having a waterdrop notch and sizeable chin at the bottom. At the back, you can see the dual camera module accompanied by an LED flash. It is worth mentioning that there is no sign of a fingerprint sensor on the back. This could mean that the smartphone maker might go for an AMOLED display having an in-display fingerprint reader underneath it.

Just like Oppo A5s and A9, Oppo Reno A is seen featuring a glossy finish at the back as per the leaked renders. The Reno A will come in two different colour options namely Blue and Black. The A in the Reno A might point towards the device being a mid-ranger considering the company’s previous naming scheme.

Apart from the renders, the report also reveals the detailed specifications of the smartphone. Oppo Reno A will come with a big 6.5-inch display with a Full HD+ resolution. Under the hood, the smartphone will be powered by a Qualcomm Snapdragon 710 chipset paired with 6GB of RAM. In terms of storage, the device will come in two different options – 64GB and 128GB memory. For the imaging, the device is equipped with a dual rear camera module having a 16MP primary sensor with an f/1.8 aperture and 2MP depth sensor. For selfies, Oppo Reno A comes with a 25MP front snapper having an aperture of f/2.4. All of this is going to be backed by a smaller 3,600mAh battery packed inside.

Unfortunately, there is no information on the pricing or the expected launch date. We’re expecting more leaks to come forward on the Oppo Reno A in the coming weeks.

Previous Elephone A6 Max Giveaway is afoot, here's how to enter