Google looks to be giving its Android OS a different face in 2019. Not only has the tech giant simply named the next major OS as Android 10, but it has also effected a few design changes to to the Android logo and the mascot.

It hasn’t ended yet, the official launch date and roll out time frame is also receiving some changes. While we had expected the Pixel 4 to boot the OS out of the box, a new report suggests other supported Google Pixel phones might be first to get the OS, even before the Pixel. 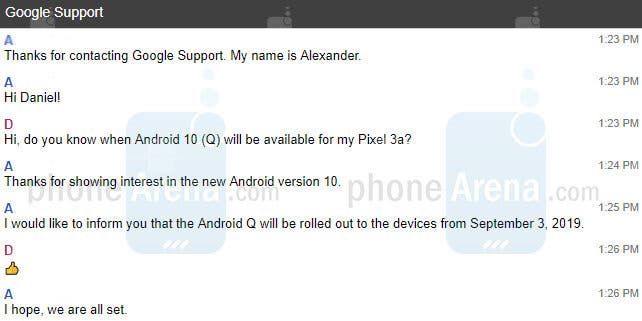 The latest report comes courtesy of Phonearena who claims to have been in touch with Google support team earlier this week. According to the report, two Google Support agents specifically confirmed independently that supported devices will receive Android 10 update beginning from 3rd of September. This was in response to a Pixel phone user who sought to know when the Android 10 update will hit his/her phone.

With this confirmation, it is now certain that Pixel devices, including the Pixel 3/3XL, 3a/3a XL,  Pixel 2/2 XL, and even the original Pixel will all get the Android 10 update in a few days time.

This is quite a change in strategy, given that the latest Pixel phones, and in this case the Pixel 4 was to be the launchpad of the next Android OS. We are not sure when Google will extend the update to smartphones from other OEMs, however, some OEMs like HMD Global has already promised a partial rollout in the coming months.

Next Aliexpress & Ulefone Global Mid-Year Shopping Festival: Up to 50% Off