Xiaomi brought some new goodies for its Smarter Living event in India but the show-stealer for me was obviously the 65-inch Xiaomi Mi TV 4X 65-inch screen. It’s the biggest and best in Xiaomi’s new TV line and it also possesses the typical aggressive price tag we’re used to seeing from Xiaomi. The introductory price of the Mi TV 4X 65-inch is Rs 54,999 and will be available via Mi.com and Flipkart starting from September 29. The company also introduced two smaller 50-inch and 43-inch 4K models and a 40-inch TV 4A refreshed model with Full-HD resolution. Xiaomi also announced the Mi Band 4 for Rs 2,299 and a new category Mi Water Purifier that will retail for Rs 11,999 in the country. You’ll find all product images in the gallery below.

The Mi TV 4X line comes with very similar hardware but at different price points and sizes to provide choice to users. Xiaomi has got the pricing of all the variants spot on this time and it should help them compete with upcoming competition from counterparts. The biggest focus is obviously the 4K UHD (3840×2160 pixels) 10-bit display with support for HDR10 and the brightest panel of any Xiaomi TV yet. It has a quad-core Cortex A55 SoC with a proprietary Vivid Picture Engine (VPE) and a four-driver speaker system that can produce 20W. The other big upgrade is on the software side with Amazon Prime Video and Netflix now provided out of the box with Patchwall 2.0 built on Android Pie. 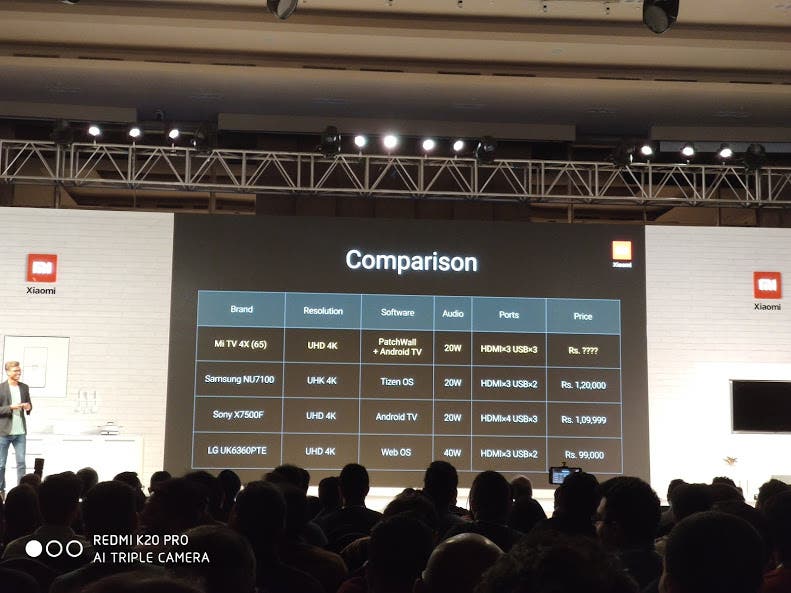