On September 25th, Redmi released its latest budget smartphone, Redmi 8A in India. Now, another budget device from Redmi is on the way. The interesting part of this smartphone is its name. According to RF certification on Xiaomi’s website, this phone is the Redmi 8A Pro. It is the first time that a smartphone in the Redmi A series will be having a Pro version. While an initial viral screenshot of Xiaomi’s website shows the “Redmi 8A Pro” as one of the devices with RF Certification, it appears that this device has been expunged from the list. 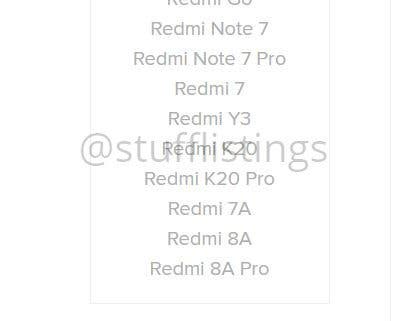 The details of the Redmi 8A Pro are still unknown. However, considering the positioning of the Redmi A-series, this device should not cost more than 1,000 yuan ($140). It is worth mentioning that the Redmi 8A Chinese version has been approved by the Ministry of Industry and Information Technology. The smartphone may be officially unveiled in October.

Certainly, the Redmi 8A Pro will have to improve on the specs of the Redmi 8A. The 8A comes with a 6.22-inch waterdrop screen with a resolution of 720×1520. This device comes with a Qualcomm Snapdragon 439 processor and it has 2GB/3GB of RAM and 32GB internal storage. In the camera department, it comes with an 8MP front camera and a 12MP Sony IMX363 rear camera. The Redmi 8A runs on Android 9 Pie with a 5000 mAh battery.