Ericsson is one of the leaders in 5G technology and presently, it has signed a couple of contracts in different regions. As of now, the company has 75 commercial 5G contracts with multiple operators and 23 of those are already commercial. According to Ericsson’s latest Mobile Market Report (November 2019 Edition), it predicts that the number of global 5G users in the next six years will be driven by the continued growth and the rapid development of the 5G ecosystem. According to the company, 5G users will exceed 2.6 billion over the next six years. 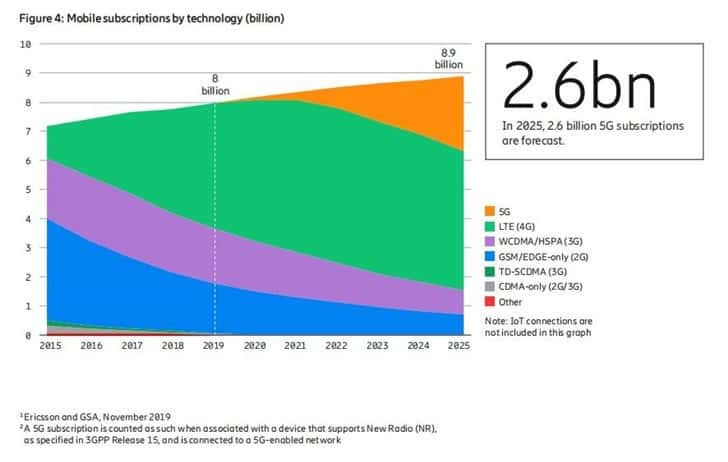 The report says that by the end of 2025, the average monthly data traffic consumed by each smartphone will increase from the current 7.2GB to 24GB. This will be partly due to new consumer behavior such as VR video streaming. A month’s 7.2GB of data means that a user can play 21 minutes of high-definition video (1280 x 720) per day, while 24GB of data can play 30 minutes of high-definition video and watch 6 minutes of VR content per day. Ericsson also predicts that by the end of 2025, 5G will cover 65% of the world’s population. It will also be responsible for 45% of mobile data traffic worldwide.

Ericsson also had its say on 5G adoption rate 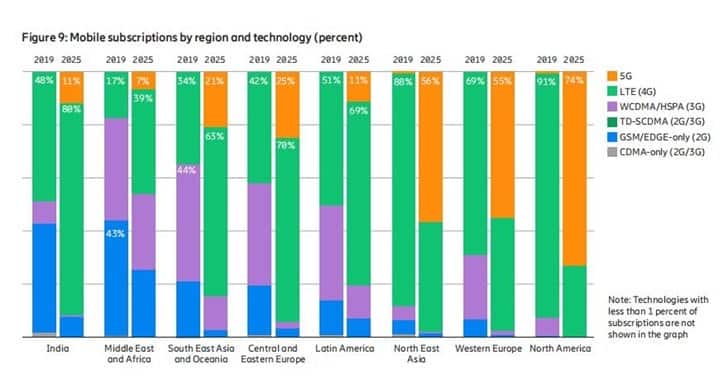 Fredrik Jejdling, Executive Vice President and Head of Network Business, Ericsson, said: “It is encouraging that 5G is now widely supported by almost all terminal equipment manufacturers. In 2020, 5G compatible terminal equipment will enter the market. This will increase the penetration rate of 5G. The question is no longer if, but how do we quickly convert use cases into relevant applications for consumers and enterprises…”

According to Ericsson, the current development momentum of 5G suggests that its subscriber growth will be much faster than LTE. The company believes that North America will quickly adopt 5G more than any other region globally. According to forecasts, 74% of mobile users in the region will be 5G users by the end of 2025. Northeast Asia will follow closely, with 5G penetration reaching 56% and Europe 55%.