A true wireless headset (TWS) refers to the category in which the headset itself and the smartphone are wirelessly connected via Bluetooth. There is no cable between the two headsets. Apple is not the originator of this product form, but they rely on AirPods to make true wireless headphones popular in the market. 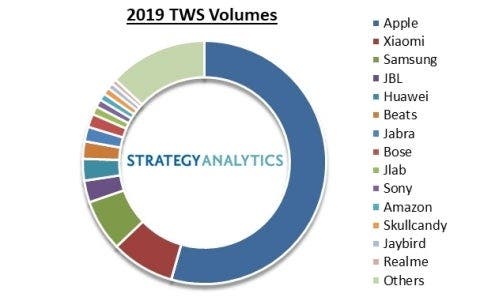 As you can see, it’s a ‘classic’ Apple business performance. Though the percentage of shipments is not necessarily the largest, because of the higher unit price, its revenue accounts for more.

Even more frightening is that Strategy Analytics believes that even if other manufacturers enter the field of TWS, Apple will still be the leading manufacturer in this field in the next 5 years.

Looking at data from other manufacturers, Xiaomi and Samsung occupy less than 10% of the market share. They rank second and third, respectively. After that, Huawei, which has entered this market relatively late, this achievement is already quite difficult.

Strategy Analytics predicts that the growth of the AirPods and true wireless headset markets will continue. By 2024, revenue will exceed $100 billion. This new category of true wireless headsets is quickly becoming a new source of revenue for many smartphone manufacturers. In 2019 and beyond, Apple achieved substantial growth in non-iPhone revenue with the help of Beats and AirPods. Earlier, a research firm Asymco also published a research report. In it, the company talked about the approximate revenue scale of Apple’s wearables, smart homes, and other categories. According to their data, the single quarter revenue of AirPods wireless headsets has reached $4 billion. This is equivalent to the peak period of the 2007 iPod player.

Previous These Huawei and Honor smartphones will not get EMUI 10

Next iPhone 12 Models To Come With Updated Face ID