After long, successful years for the Moto G series, Motorola will release for the first time ever a Moto G smartphone that comes with a Stylus. It will be like the Galaxy Note of Moto Gs, but not so premium. The smartphone has been in the headlines a lot lately. First thought as Moto Edge+, Motorola’s rumored flagship, we got a confirmation from @evleaks, that the Moto G Stylus is just a mid-range smartphone with a stylus. Now, we have a full spec sheet that confirms this fact.

The Moto G Stylus will ship with a 6.36-inch 2300 x 1080 display with a hole in the top left corner for the selfie camera. There will be a Snapdragon 665 SoC paired with 64GB or 128GB of storage. We expect the RAM to be 4GB or 6GB. Unfortunately, there is no mention of storage expansion but XDA-Developers state that the phone will in single SIM and dual-SIM variants.

The Moto G Stylus will ship with three cameras and not four as previously thought. Reports have indicated that it has a Quad-Camera setup lead by a 48MP camera. However, it turns out that the fourth hole is actually a laser focus system and not a sensor. The primary camera is Samsung’s S5KGM1 camera which comes paired with a 16MP wide-angle “Action Cam”. It’s the same wide-angle camera that debuted on the Motorola One Action. The third and last sensor is a 2MP macro camera. On the front, there is a 25MP selfie snapper. 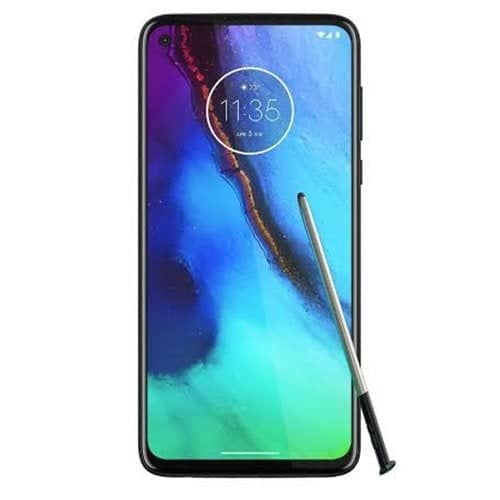 The Moto G Stylus has a rear-mounted fingerprint scanner and it draws power from a 4,000mAh battery. We expect it to support at least 15W, while 18W would be the ideal. However, the FCC filing for the device states that it supports just 10W fast-charge, which means that it charges very slowly. Most mid-range nowadays have at least 15W fast-charging, so it’s really sad to see that Motorola keeps plucking smartphones. Interestingly enough, while it lacks fast-charging, it is said to debut with NFC in some regions. Last but not least, it will run Android 10 OS.

The Moto Stylus, or perhaps, M-Pen?

The source also mentions some software features of the phone. The G Stylus will come with an app that can be configured to launch an app or shortcut when the stylus is removed from its slot. There’s a feature called “Moto Note” whose function doesn’t need to be explained. However, it has been revealed that users will be able to erase with a finger while using the stylus. Moreover, they will be able to add a watermark with a date on written notes.

This app records the time and location you removed the stylus and send you a notification if the stylus has not been reinserted after a certain duration.

A render of the phone’s bottom also appeared today. It shows the stylus is positioned at the bottom right corner of the phone. There is also an audio jack to the far left while a USB Type-C port sits in the middle and a speaker grill flanks it on the right.

According to reports, the Moto G Stylus will go official alongside Moto G8 and G8 Plus during MWC 2020.