As reported a couple weeks back, Korean tech giant – Samsung – is working to bring a new 5G variant of the previously launched Galaxy A71 5G in the US. The new handset is expected to be named Samsung Galaxy A71s 5G; or at least that’s what we thought.

Samsung Galaxy A71s 5G UW Launching in the US with Verizon

According to new rumors, the device might instead be called Galaxy A71s 5G UW. “UW” stands for UltraWideband and it’s part of the naming scheme that Verizon utilizes for 5G phones. UltraWideband can indeed be interpreted as mmWave which basically means support for the next generation 5G connectivity.

So, the smartphone should now come as “Samsung Galaxy A71s 5G UW” and be an exclusive for US provider Verizon. This has been confirmed by some recent regulatory documents in which we see the device with model name SM-A716V, being paired with a “Galaxy A71s 5G UW” commercial name.

As far as design and specs, we should expect something similar to the plain A71 5G; with the main difference hiding under the hood. The newcomer should indeed be powered by a Qualcomm Snapdragon 765G CPU; which as we all know, supports native 5G connectivity. So, begone the Samsung Exynos 980 of the basic variant, instead we’ll have chipset that could make the handset slightly more affordable. 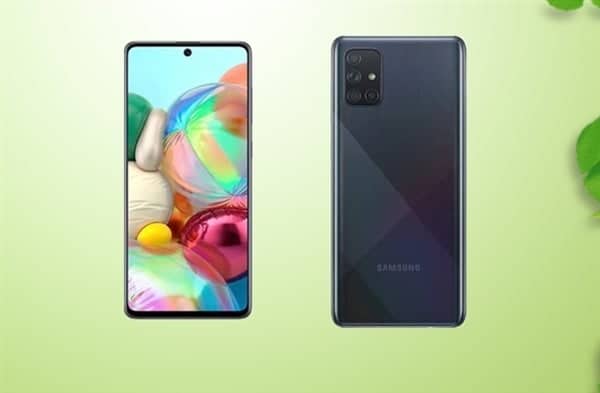 Sadly though, as with all Samsung smartphones powered by Qualcomm chips, this model won’t be available throughout the world. As a matter of fact, it could only go to the US under Verizon.

Now, since we expect all specs to remain unchanged. Let’s quickly recap what we find on the Galaxy A71 5G. Samsung’s device comes with a 6.7-inch FHD+ Super AMOLED Plus
Infinity-O Display display with a resolution of 1080X2400; with the selfie snapper having a resolution of 32MP and an aperture of F2.2. Meanwhile on the back we should find a total of four cameras. These should include a main 64MP shooter with F1.8 aperture, a secondary ultra wide camera with 12MP resolution and F2.2 aperture, a 5MP depth sensor and a 5MP macro lens with F2.4 aperture.

The Galaxy A71 5G’s dimensions are 75.5 x 162.5 x 8.1mm for a weight of 185 grams. We then find two RAM options of 6GB and 8GB and single internal storage at 128GB. Luckily there’s support for an external micro SD card (up to 1TB). Finally the smartphone is powered by a 4,500mAh capacity battery and supports 25W Super Fast Charging.

Next Researcher found a security vulnerability with "Apple Login" option