Samsung is reportedly looking to widen the A series of smartphones further. Recent reports point out that the company could be planning to launch an entry-level smartphone dubbed the Galaxy A01 Core.

The recent entry comes from the Bluetooth SIG certification. The device is listed under the model name SM-A013F_DS. While the “DS” suffix in the model name could be the indication of a dual SIM variant, the marketing name is finally out in the open.

According to the certification, the device will be called the Galaxy A01 core. The Bluetooth version of the device is 5.0. And this gives us a hint that the SoC powering the device might not be too old.

If we recall, Samsung launched the entry-level Galaxy A01 smartphone last year. The device had a 5.7-inch HD+ display, Qualcomm Snapdragon 439 SoC, 6GB of RAM, and 128GB storage. It was powered by a 3,000mAh battery inside. Looking at the new listing, it’s unclear if the tagline ‘core’ represents an upgrade or a downgrade over the A01.

However, the Galaxy A01 core is not new to us. Earlier, an entry-level phone with similar model name SM-A013F appeared in the radar of leaks which was thought to be A01’s toned-down version with a name Galaxy A10e. 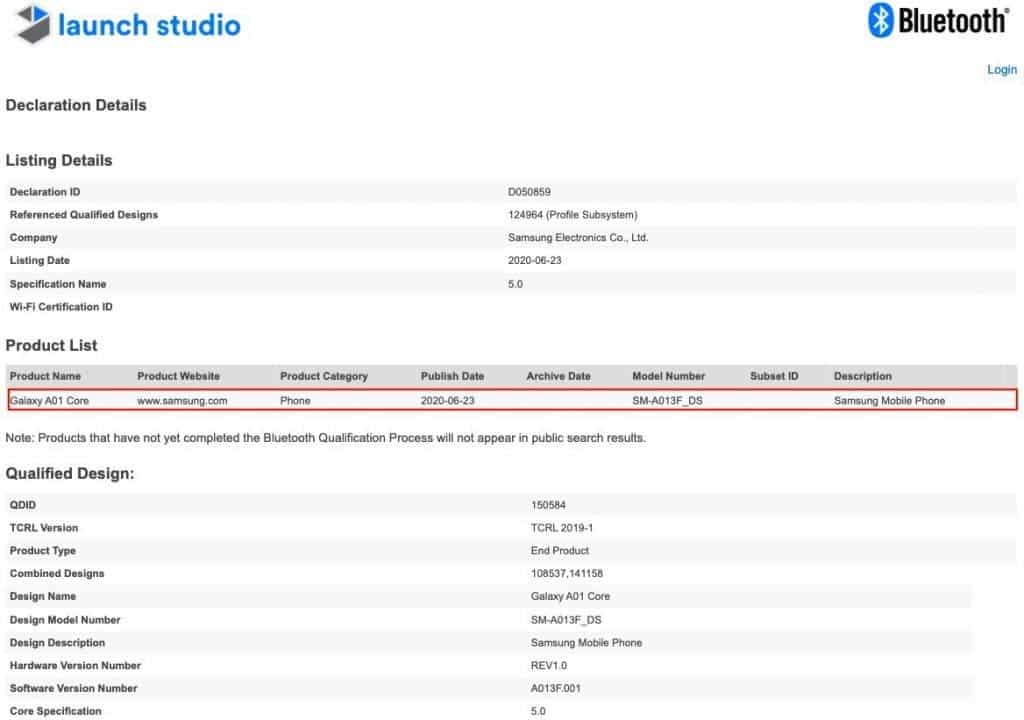 Is this the one with the removable battery?

A few days back, a removable battery of a handset was leaked that had the same model number. This followed by a Geekbench listing which weirdly listed the handset running on a three-year-old MT6739 SoC.

The device scored a poor single and multi-core scores of 585 and 1665 respectively. But according to Mediatek’s product listing, the MT6739 supports only up to Bluetooth 4.2. Hence, the latest certification rules out the possibility of an older chipset over an SoC that is still under the wraps.

We are not sure of the other specifications as of yet but considering the A01, we can expect this to sport at least a dual camera setup with similar internals. Further, the Geekbench listing also revealed the device will run on Android 10 out-of-the-box.

That being said, Samsung could have changed its mind to pack in upgraded internals on the A01 core as the predecessor already had internals similar to the one listed on the Geekbench. Nonetheless, We will have to wait for more leaks to get a clear picture of its specifications.

Next Meizu announces beta tests of Flyme OS 8.1 based on Android 10 for several devices