Apple is not very satisfied with the fact that physical buttons are there to take space. In 2017, the company finally removed the home button aka Touch ID, which resulted in the iPhone X featuring the hideous wide-notch and slimmer bezel. Not so small, I know. Now, the company wants to give a further step by making the remaining buttons even slimmer than they are. The company has filed a patent that describes the design of a “compact pivoting input device”, which will reduce the internal volume that a button takes.

Of course, the parents are not all about space-saving as the mechanism can also offer programmable feedback. Such buttons can provide different haptic feedback, configured by software, and will also be force-sensitive. This teases a future feature on iOS or other apple devices where developers might be able to provide different levels of haptic feedback on these buttons. This may also be useful for future smartwatches and hearables. 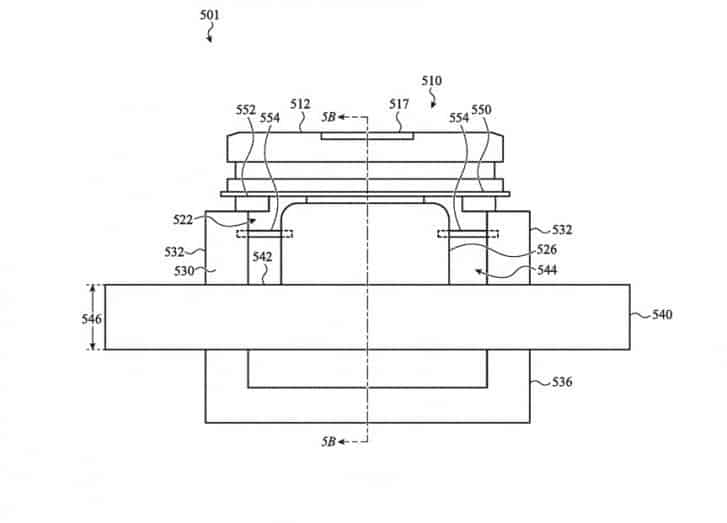 The patent gives the iPhone power button as an example. For that reason, we believe that the Apple smartphone is likely the first use case. However, other devices may also benefit from this technology. Instead of just buttons, this can be used for toggles as well. There are other several potential users like a super-thin keyboard cover for the iPad with programmable feedback to mimic the feeling of a conventional keyboard.

The patent goes into excruciating detail of the operation, but the mechanism works similarly to a speaker. There is an electric coil surrounding a permanent magnet. When power is applied, it moves the magnet. As a result, users will experience the good old haptic feedback feeling. This is not big feedback, though, as the magnet moves just 10 microns or 0.01 mm. However, that is enough for users to feel the button’s feedback. Moreover, there’s a pressure sensor at the bottom to register presses and the force applied. So, once again, developers can program different functions depending on how much pressure the user applies on the button.

If you recall, Apple’s latest iPhone Home Button wasn’t a physical button. The company converted the old formula into a fixed capacitive sensor that relies on the Taptic Engine to provide the “click” sensation. The very same for the touchpads on MacBooks. Those are fixed though, while these new mechanisms will move. This may have an impact on the realism of the “click” effect.