Semiconductor Manufacturing International Corporation (SMIC) was not a daily name before the U.S. started clamping down on Chinese companies. However, since last year, many Chinese supporters are hoping that SMIC up its game. SMIC is the largest chip foundry in China. However, its current most advanced 14nm process is many years behind the industry’s leading 7nm process. At best, SMIC can offer entry-level chips. Nevertheless, the recent situation between the U.S. and China seems to have some positive impact for the company. 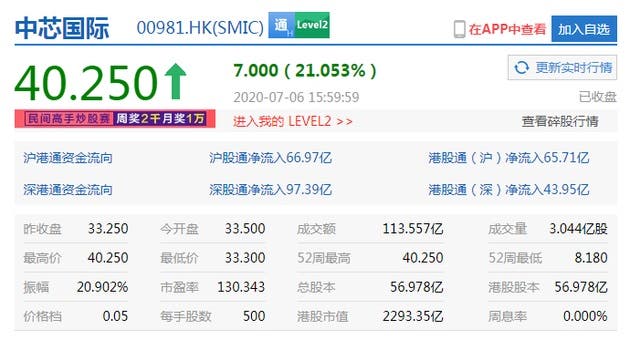 For starters, more Chinese manufacturers now consider its solution. In addition, SMIC’s share price rose by more than 21% on Monday. Presently, its share price exceeds HK$40 ($5). As of the close, SMIC rose 21% to 40.25, with a market value of 229.335 billion Hong Kong dollars. This year alone, SMIC’s stock has risen more than 230%.

On July 5, SMIC disclosed its initial public offering and issued an announcement on the Science and Technology Board. At the time, its issue price was $3.91 per share. The Chinese chipmaker held an online press conference on July 6th and commenced issuing shares on July 7th.

SMIC is many years behind the likes of TSMC and Samsung

According to recent reports, SMIC is making major moves to complete its 7nm and 8nm processes. However, there are also speculations by analysts that SMIC can not develop below 7nm/5nm. SMIC is in charge of Huawei’s Kirin 710A processor. This chip uses SMIC’s 14nm process and clocks 2.0GHz. This lower version of the Kirin 710 is a milestone achievement for China’s semiconductor chip technology.

SMIC is the only foundry company in China that can provide a 14-nanometer process. In the face of the recent US ban, it is now a “go-to” company for many Chinese OEMs. Its 7nm process has been in development for a long time. However, due to the lack of high-end lithography machines, the progress of research and development has been slow.

Relative to TSMC, Samsung, and other companies, SMIC’s 14nm about 4 – 5 years late. There is still a big gap in the 7nm and 5nm processes. It is still very difficult to make up for the technology gap. SMIC seems late in everything, technology, talent, equipment, capital, and so on. The threshold to meet is very high.

Next What is TikTok Pro? Is it real or fake?