Chinese manufacturing giant, Huawei, is currently fighting for its survival in the smartphone market. The U.S. latest ban ensures that it blocks all avenue for Huawei to acquire chips. However, this is not stopping Huawei from developing more smartphones. According to popular Weibo leakster, @长安数码君, Huawei is testing a smartphone that supports dual-mode 5G and WiFi 6+. 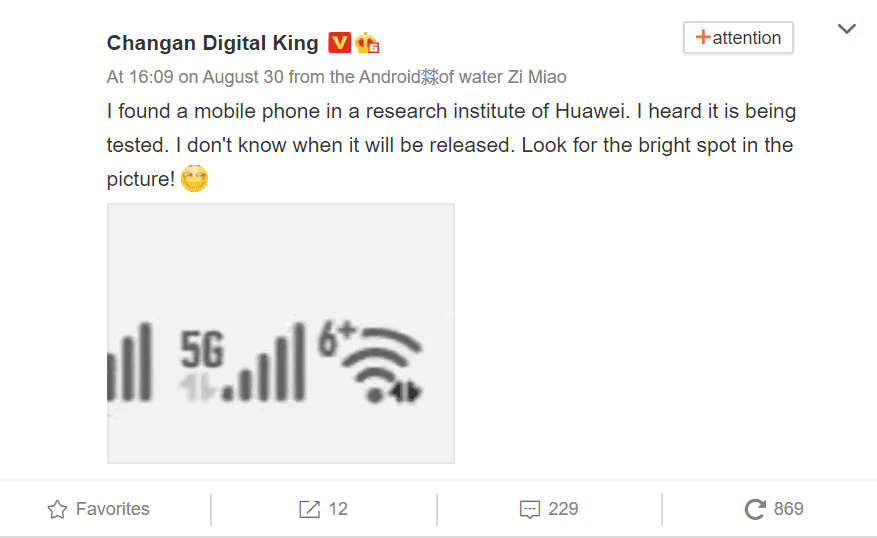 He’s leak says “I found a mobile phone in a research institute of Huawei. I heard it is being tested. I don’t know when it will be released. Look for the bright spot in the picture”.  The picture shows that the mobile phone supports dual 5G and WiFi 6+. However, it is not clear whether this device is the Huawei Mate 40 series phone.

At present, most Android smartphones or processors have 5G network support. However, in the dual-card state, it can only be 5G+4G. In addition, the current mobile phones with Dimensity 1000+ supports 5G+5G dual standby, 5G+5G smart switching. Nevertheless, the 5G dual-carrier aggregation also needs subsequent OTA update support.

Huawei is expected to release the latest 5nm Kirin 9000 5G chip in September, which will be used on Huawei Mate40/Pro series phones. The Huawei Mate 40 standard version will use LGD’s 6.67-inch curved screen with a 90Hz refresh rate. On the back, this variant will carry a 50-megapixel main camera. In its turn, this camera will be accompanied by a 20-megapixel ultra-wide-angle lens and an 8-megapixel telephoto lens.

The Mate 40 Pro will sport a 90Hz waterfall screen of LGD/BOE. It used a hole-punch design and supports 3D Face ID. The main camera sensor on the back has the same 50-megapixel resolution. This liquid lens is accompanied by an 8-megapixel ultra-wide-angle movie lens, as well as a periscope lens and a TOF lens.

At the moment, we have nothing about the Pro Plus variant. However, as the name implies, it should have a better configuration. In August, the rendering of Huawei Mate 40 Pro has been leaked. It uses a large-curved ring screen, double hole-punch screen, and a circular camera solution at the back. In addition, the physical volume button is back and the phone remains the virtual buttons around the screen.

Huawei will officially release the Mate 40 series in a few week’s time. We will have to keep our fingers crossed while we wait for the official confirmation of these smartphones.

Next Qualcomm and MediaTek to launch 5G chips below $20