Samsung changed the image we have from its budget smartphones last year with the arrival of the Galaxy A and M series. The company came from years and years of confusing budget smartphones to a new lineup that actually has good smartphones. After losing its userbase to the Chinese wave, the company is bringing some features that were present only in their flagships. Samsung is doing quite well with the A-series and even surpassed Xiaomi in India. The company is moving to the 2021 schedule and apparently one of the first devices coming from the next-gen is the Galaxy A12. 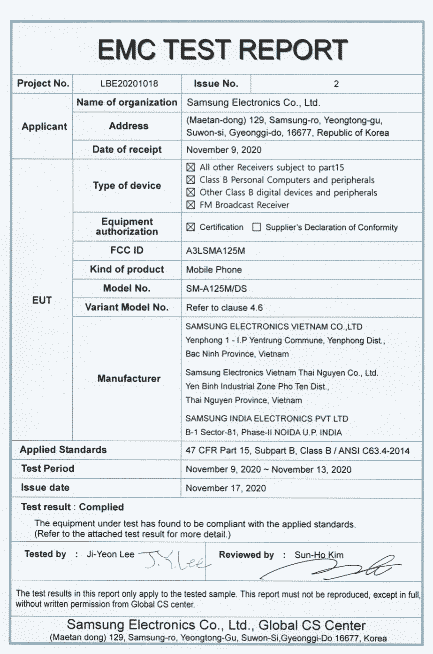 The new Samsung Galaxy A12 has been in the rumor mill for a while. The device already passed through the headlines with some of its key aspects. Now, we’re getting consistent proof of its existence and imminent arrival thanks to FCC. The device passed through the US regulatory body with details about the battery capacity and its charging speed.

The Samsung Galaxy A12 passed through FCC certification with model number Samsung SM-A125M. The listing reveals that the Galaxy A12 Battery carries a model number EB-217ABY. It suggests a total capacity of 5,000mAh battery which is excellent and on par with current mid-range smartphones. The Galaxy A21s has the exact battery capacity and its battery model brings the very same EB-217ABY model number. Besides the battery size, the FCC listing also reveals the phone’s 15W charging capabilities. It outputs 9.0V at 1.67A).

In the past, the phone received NFC certification that also revealed some of its specs, and obviously, NFC support. It confirms Samsung’s intentions of bringing its Samsung Pay platform to the budget segment. The A12 probably will be one of the cheapest Samsung smartphones in the next batch of devices. The device also passed through the GeekBench platform with the MediaTek Helio P35 chipset. This a cost-effective chipset with eight Cortex-A53 cores clocked at up to 2.3GHz. This isn’t the most capable neither the latest chipset released by MediaTek but can offer decent performance for everyday tasks. The phone will come with Android 10 OS and One UI 2.5 straight out of the box. The A12 will be available in variants with 3GB of RAM and 32GB of storage or 64GB of Storage. Of course, you’ll be able to expand this amount via a microSD card. Unfortunately, Samsung is yet to reveal its launch plans for this handset. We expect more details to appear soon.