Samsung revolutionized its mid-range lineup in the past two years with the competitive Galaxy A and M-series. Among the most successful phones, we can list those in th Galaxy A50 and A70 series. It’s not a surprise to see that the first mid-range phones coming in 2021 from Samsung are the Galaxy A52 and Galaxy A72. The company’s hot-selling 2020 phones will get proper sequels this year featuring 4G and 5G connectivity. So far, we’ve been seeing multiple leaks about this duo of devices. Recently, the Galaxy A72 4G variant got its official support page. Now, the device has passed by FCC certification.

The new certifications shed some light on the Galaxy A72 charging capabilities. Moreover, it reveals that the charging brick will be present in the retail package. Who would ever imagine that we would list the charger as a nice thing to have in the box. We’re living dark days in the smartphone industry, and it’s just a matter of time until all companies follow what Apple started by ditching the charging brick. As far as the Samsung mid-range lineup is concerned, its users are still safe. 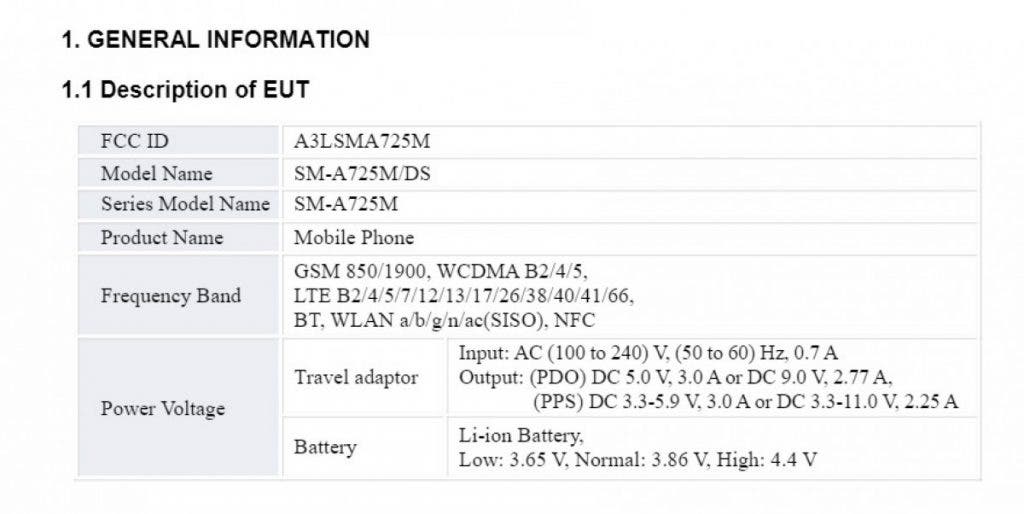 According to the FCC documents, the Galaxy A72 4G has the model number SM-A725M. The phone comes with a travel charger rated at up to 25. This is Samsung’s standard fast charger for a lot of its devices since the Galaxy Note 10 series came around. Unfortunately, not all phones coming with this charge will reach this charging rate. Unlike Chinese companies, the Korean firm seems to be very shy about pushing fast-charging technologies forward.

Unfortunately, FCC does not shed light on the device’s internal specs. However, a series of leaks already gave us a good glimpse into this handset’s specifications. The Galaxy A72 4G and 5G are said to come with a 64MP main camera on the rear. This unit is joined by a 12MP ultrawide, 5MP macro, and 5MP depth sensor units. Both devices will come with AMOLED displays and in-display fingerprint readers. The smartphones will be 8.1mm thick and will come with a 3.5mm headphone jack.

As per reports, the 4G variant of the Galaxy A72 will have a price tag between €450-500 and the 5G variant between €550-600. Unfortunately, we still have no details about the device’s launch date. But it is expected to come really soon now that it has an official page.