Motorola is on a roll during the first days of 2022. The company is expected to reveal its flagship Motorola Edge X30 in international markets pretty soon with the Snapdragon 8 Gen 1 SoC. In fact, it could arrive as one of the first international devices packing this chipset. There are already plenty of Snapdragon 8 Gen 1-powered smartphones in China, but the global market has none. Anyway, the Lenovo-owned brand is also preparing a new round of mid-range smartphones and budget offerings. Apparently, the company will soon introduce a Moto G Stylus 2022 and a rumored Moto G22 will tag along. The device has passed through Geekbench and the specs are not very appealing. However, we have to learn to deal with disappointments in the low-end market.

Moto G22 – a smartphone for the low-end segment

The alleged Motorola Moto G22 has passed through Geekbench with this moniker. Apparently, the company is not really interested in hiding the device’s identity when running the testing benchmarks. The database reveals that the handset will come with the MediaTek Helio P35 SoC. This chipset is really old at this point with eight ARM Cortex-A53 cores. Moreover, it’s not as efficient as recent offerings. In fact, MediaTek chips out of the Dimensity lineup never cared much for energy efficiency. But we’re assuming that Motorola will compensate for this with a huge battery. That’s what these brands usually do, they compensate for the lack of performance with a big battery like a 5,000 mAh one, for example. 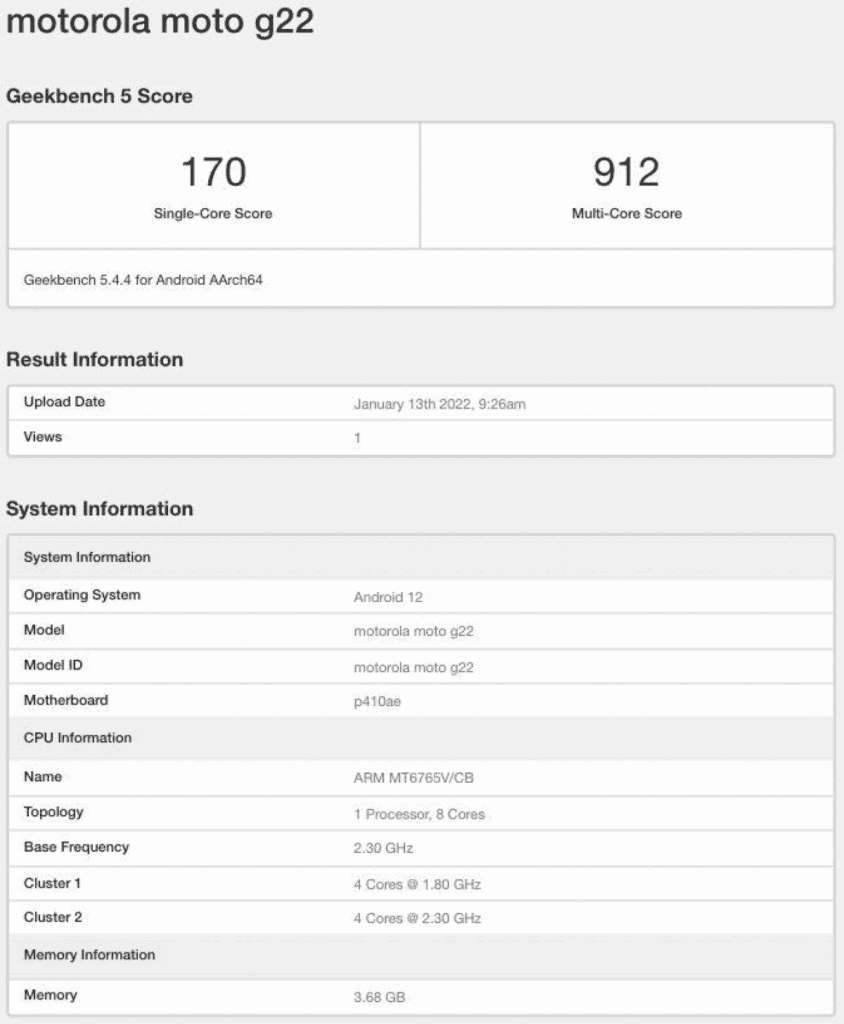 The device scores tepid 170 points in the Single-Core tests and 912 points in the multi-core department. Unfortunately, the disappointments are not only in the performance department. The handset runs Android 11 OS. As we’re walking to the mid of January, it’s really sad to see devices launching with the 2020 Android version. Android 12 has been out since October 2021, but many companies are still shipping smartphones with the older Android version. Motorola already revealed that it’s not really concerned with Android updates, and even in the flagship segment only ensures one single update. With that in mind, we don’t even know if this low-end handset will be updated in the future.

The listing also confirms 4 GB of RAM. We expect it to come along with 64 GB of Internal Storage. We’re also expecting an HD+ display and a dual-camera or triple-camera setup, but with a bigger camera and two not-so-useful units. More details will appear soon.

Next Motorola Tab G70 has been revealed in Brazil