Uncertainty with the supply of components dictates its own rules in the market. So, Samsung pretty much delayed the release of the Galaxy S21 FE, leaving it no chance to become popular. In the case of the Galaxy A73, the company also intends to take it slow. Whether it will be a miscalculation or a verified step, we will find out after the announcement.

As a rule, the company releases a pair of Galaxy A5x and A7x smartphones, but this year it will move away from this practice. The Galaxy A53 will be the first to enter the market, which should pick up the banner of one of the company’s popular devices on the market after its predecessors. And only a month later, the Galaxy A73 will be presented. This should happen in April, which means that the premiere of the Galaxy A53 should be expected in March.

It's weird to see Samsung preparing to release the Galaxy A73 a month after the A53. Hopefully this delay means it will be available in more countries pic.twitter.com/ANuqNp7ihY 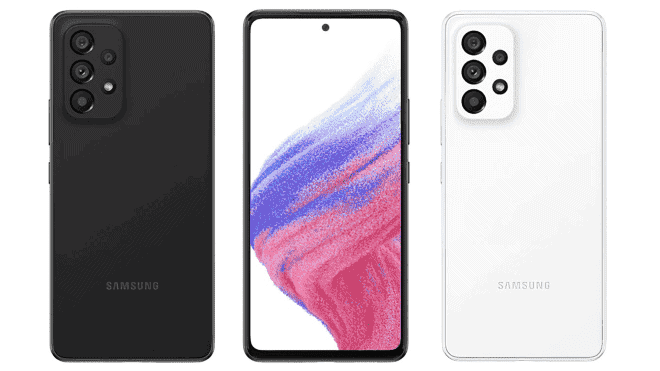 A German source, who regularly publishes details about smartphones not yet released, has presented high-quality images of the Samsung Galaxy A53 smartphone, the model that replaces the hit Galaxy A52.

Judging by the pictures, the smartphone will not differ much from the current model. This applies to both the front panel and the back. The camera unit will not only retain its current appearance, but the sensors too; the configuration with sensors with a resolution of 64, 12, 5 and 5 megapixels will remain. The main camera will have a 32-megapixel sensor.

Perhaps the most important innovation in the hardware platform is the transition from the Snapdragon 750G single-chip system; to its own Exynos 1200 with two large cores at 2.4 GHz and six small ones at 1.8 GHz. The novelty is also credited with a 6.5-inch Super AMOLED screen with a resolution of 2400 x 1080 pixels and a frame rate of 120 Hz; 6-8 GB of RAM and 128 GB of flash memory, a 5000 mAh battery with 25 W charging support. The Galaxy A53 will be 8.1 mm thick and weigh 189 grams. While there is no data on when the premiere of the smartphone will take place. But it can debut in March.