Eve throws a jab at the iPhone 14 for not improving

Even Eve, the daughter of Apple founder Steve Jobs, shared similar sentiments, mocking the latest iPhone 14 phone on Instagram. Eve shared a meme on Instagram showing how easy it was to upgrade to a new phone. She said on Instagram.

“Me upgrading from iPhone 13 to iPhone 14 after Apple’s announcement today.” The caption comes with an image of a man holding a new shirt (which he just bought) that looks the same as the one he’s wearing. 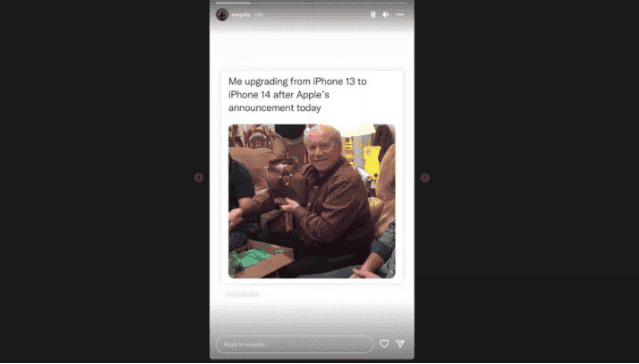 She is not the only person making fun of Apple for not significantly upgrading from the previous model. The Apple iPhone 14 standard model does not come with significant upgrades. The design is technically the same as the previous generation. Thus, it will be very difficult to tell the difference between the two at first glance. Also, it comes with the same old processor and uses the same 60Hz refresh rate screen as the iPhone 13.

Thus, it may not make any sense for an iPhone 13 user to “upgrade” to iPhone 14. However, upgrading to the iPhone 14 Pro or iPhone 14 Pro Max makes sense. This is also one of the reasons why Apple did not increase the starting price of the iPhone 14 series in its major markets (U.S. and China).

Previous Apple prioritizes the U.S. and China - increased the iPhone 14 series price in other regions