If you are a YouTube user, then you have noticed the ads at the start or in the midst of a video. This is for free YouTube users and not those on YouTube Premium. The ad can be a single ad or at most two ads and the second ad is usually skippable. However, there are now reports YouTube users (non-Premium) will now have to deal with up to five unskippable ads. It appears that Google is already testing this feature on YouTube and the implementation will commence this month.

Over the past few days, there have been multiple complaints from YouTube Free users. The users took to Reddit and Twitter to voice their frustration. According to the complaints, users now receive five (5) unskippable ads instead of two (2). Although the users did not say the length of each ad, one Twitter user said “youtube just gave me 5 long unskippable ads”. This gives the impression that the ads are long. YouTube ads are usually between 5 – 30 seconds with the latter regarded as long. 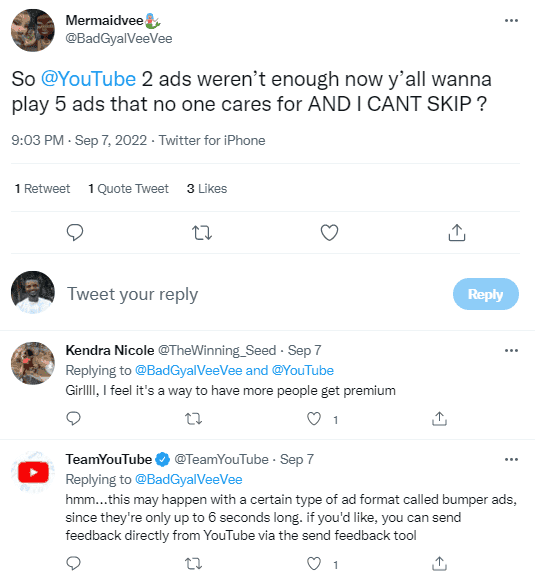 After several complaints mostly on unofficial platforms, Team YouTube responded to a tweet with an explanation. The company claims that this situation occurs with what it called “bumper ads”. However, the respondents claim that each ad is only 6 seconds long so the 5 ads that users will deal with still do not exceed the regular 30 seconds ads. The company also asks users to send feedback directly from YouTube via the send feedback tool. Google wants to hear from users what they think about the new “bumper ads”. Unfortunately, none of the ads is skippable and users will have to see through all five ads that they probably have no interest in.

Checking on a few personal YouTube accounts, the regular 2 ads are still active. This means that not all users are actually receiving 5 ads. This implies that the feature is only in testing and Google probably wants to see the response of users. While most users still get two ads with the second skippable at the start of videos, we can not tell if the five-ads feature will roll out to more accounts.