It’s time for the monthly rating released by AnTuTu of the most powerful Android smartphones in November 2022, and its seems that there are no notable changes from October.

However, the newest version of the leading CPUs, the Qualcomm Snapdragon 8 Gen 2 and MediaTek Dimensity 9200, have been unveiled, and the upcoming monthly ranking may already contain significant changes.

The AnTuTu crew informs users that the scores for each model in the ranking are averages based on test results between November 1, 2022, and November 30, 2022, all using the AnTuTu V9 platform database. 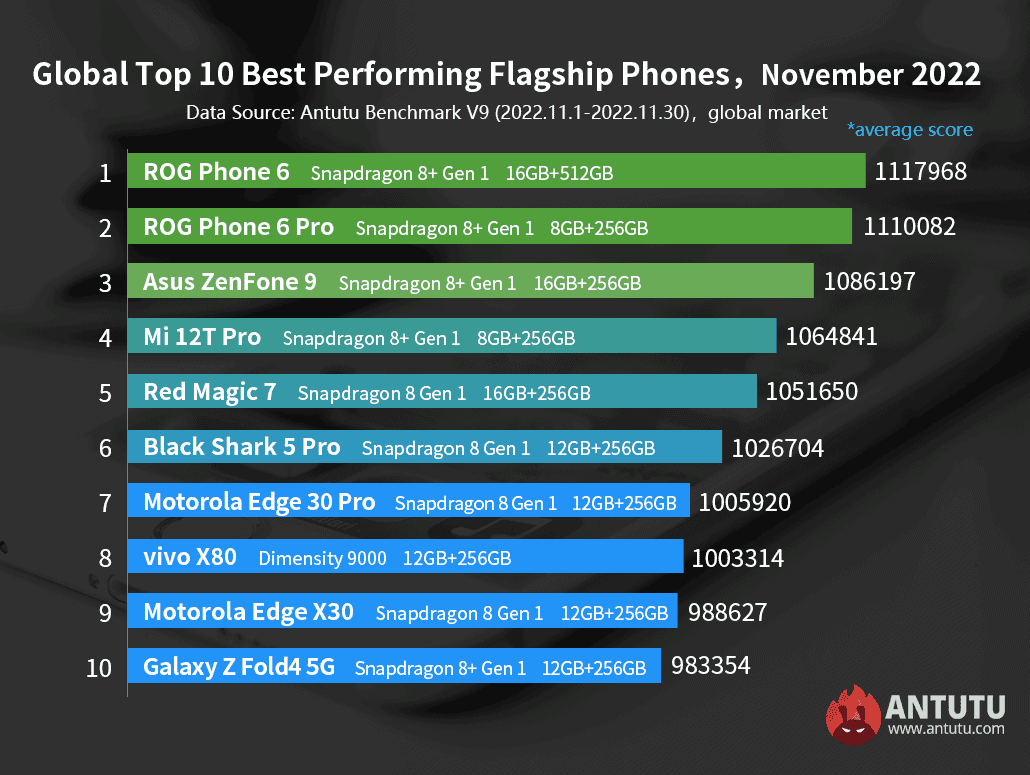 Unsurprisingly, the ROG gaming phone once again ranks in the top two on the list of flagship phones. The ROG Phone 6 Dimensity Edition is absent from the list. Most likely because the number of tests fell short of the necessary threshold.

In comparison to the ROG Phone 5s of the previous generation, the ROG Phone 6’s appearance hasn’t changed all that much. Although the weight of the phone is not ideal for daily usage. It is not viewed as a drawback of a gaming phone. The phone has a USB-C port on the left side for charging while playing games. Which is extremely typical of gamers.

With 16GB of RAM, a Snapdragon 8+ chip that enables it to run all Android platform games steadily, and a 3.5mm headphone port at the bottom of the phone that provides it an advantage in FPS games, the ROG Phone 6 is the best flagship gaming phone.

The ZenFone 9 from Asus comes in third. For a tiny, non-gaming phone, this is an impressive ranking. The Asus Zenfone 9’s 5.9-inch screen, retention of the 3.5mm headphone connector, and support for IP68 water and dust protection are its greatest features. Zenfone 9 has a Qualcomm Snapdragon 8+ processor, 6/8/16GB LPDDR5 memory, 128/256GB UFS3.1 flash memory, a 4300mAh battery, 30W fast charging, Wi-Fi 6E, Bluetooth 5.2, and NFC support as its core configurations.

It should be noted that all ten places, apart from the eighth position, are held by smartphones powered by a Qualcomm CPU. 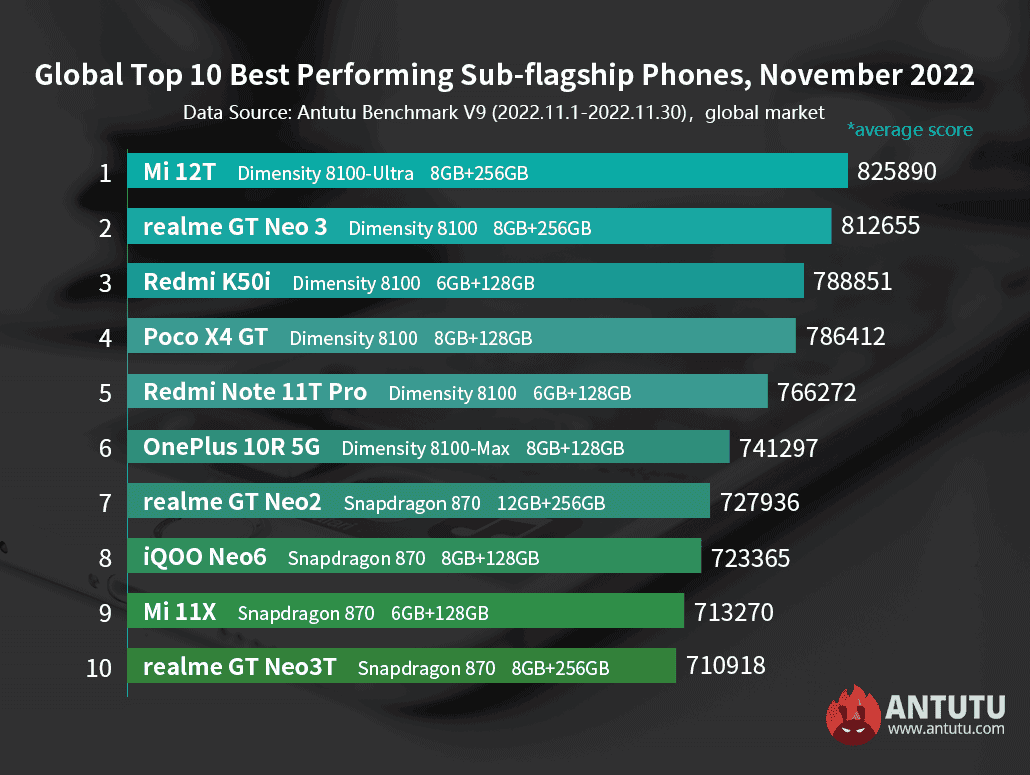 Moving on to sub-high-end smartphones, the Xiaomi Mi 12T holds the top spot in the AnTuTu ranking with 825,890 points. Followed by the Realme GT Neo 3 and the Redmi K50i.

In the second half of the year, Xiaomi released the Mi 12T series for the international market. The basic Mi 12T Pro comes first in the sub-flagship phone list. While the Mi 12T Pro is ranked fourth in the list of flagship phones. The Mi 12T has an advantage over the other phones on the list thanks to its enhanced 108 MP main camera. The Mi 12T series also carries over the Xiaomi 12 series’ superb design. And its fundamental specifications and imaging abilities are among the best available in its pricing range. The MIUI is the only thing that causes controversy and is difficult for many people to adapt to.

The realme GT Neo 3, which is the second phone using the Dimensity 8100, comes in second place. The realme GT Neo 3 comes in a COF package with small bezels on all sides. Because realme, a young phone brand, is aware of the appeal of the phone’s appearance to young people. There is also a version co-branded with well-known social media.

Dimensity 8100 chip, LPDDR5 memory, and UFS 3.1 flash memory are what give the Realme GT Neo 3 its powerful performance. Dual stereo speakers and an X-axis linear motor are also available in the realme GT Neo 3 for improved vibration performance.

The 150W charging speed of the realme GT Neo 3 is its most amazing feature. It is considerably more daring than Apple and Samsung’s charging systems. And so far doesn’t appear to have drawn criticism against realme.

The Redmi K50i, which has a similar specification to the Redmi Note 11T Pro and comes in third place. It has a MediaTek Dimensity 8100 chip, 8GB of LPDDR5 memory and 256GB of UFS 3.1 storage. In addition to a 6.6-inch FHD+ LCD screen with a 144Hz refresh rate, a 5080mAh battery, and 67W fast charging capability. 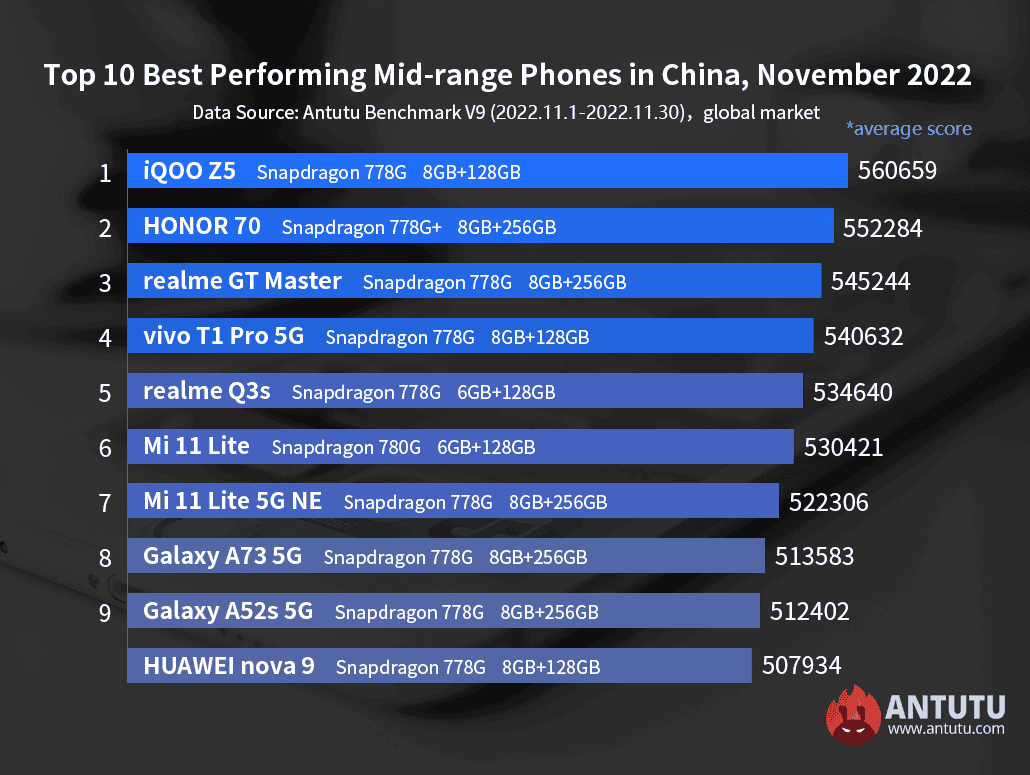 Take note of how the Qualcomm Snapdragon 778G CPU is essentially dominating this ranking.

Previous The iPhone 15 Ultra will be much more expensive