Microsoft’s controversial presence in the smartphone market is kept by the Surface Duo series. The product has been a dual-screen device that runs Android but has a strong focus on Microsoft’s portfolio of applications. The device offers an experience that is different from overall Android smartphones. However, it’s still a niche product. The company had some problems with the original but managed to launch the Surface Duo 2 with the same dual-screen design. It’s a significant improvement, but things are set to change with the Microsoft Surface Duo 3.

Ahead of the launch of the Microsoft Surface Duo 3, we have some interesting leaks. The device is reportedly in development, and a set of new patents may reveal its design. A new Microsoft patent application has come to light. According to it, Microsoft may ditch the dual-screen concept with the current approach. Instead, it will launch a product that is closer to what we have in the foldable segment.

Microsoft Surface Duo 3 to be a full-fledged foldable

The patent application carries a “FOLDABLE DISPLAY DEVICE” description. It focuses on a folding screen product. Apparently, the design may arrive with the upcoming Surface Duo 3. We assume that Microsoft had enough time to make this patent into a real product. After all, the filing dates from 2021 while the actual publication is from early 2022.

Currently, the Surface Duo series bets on a dual-screen design. It literally has two screens with a hinge in the middle. Although the screens are different, users can still interact, drag and drop, and explore multi-tasking in a seamless form. However, Microsoft wants to go beyond. Apparently, the company will not bet on this design anymore. Instead, the next Surface Duo 3 can be a full-fledged foldable smartphone. 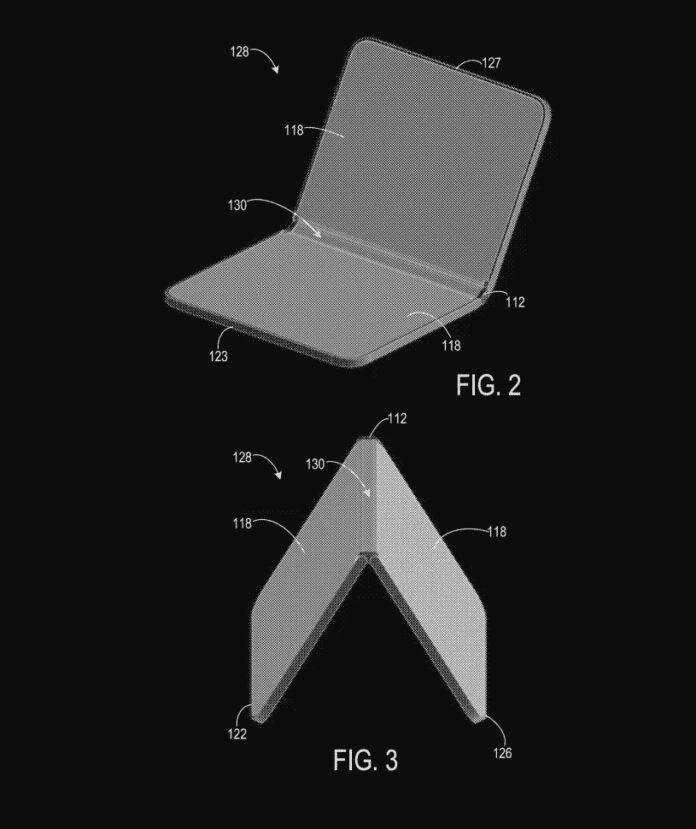 The patent shows a device that can seamlessly switch between a tablet and a one-handed smartphone. The panel is bent inwards and outwards. So far, this is a characteristic that most foldable phone makers are not exploring.

You need to digest this with a pinch or two of salt. As always, patent applications are not determinant proofs. However, it may show a clear direction of what Microsoft intends to do with the Surface Duo 3 or even with the Surface Duo 4. The giant definitely is not giving up the smartphone segment.