We have been hearing a lot about big smartphone launches from Samsung. All of those are supposedly lined up for early 2023. While the Galaxy S23 series is one of them, Samsung also has big plans for mid-rangers this year. And this leak about the Galaxy A54 confirms that.

There have been rumors regarding the specifications of the mid-range Galaxy A54. And from those, we were pretty sure that the phone was going to be a banger. But now that details about the color options are out, we are confident that the new mid-ranger of Samsung will also be a beautiful-looking phone.

Two New Colors for the Samsung Galaxy A54

In case you missed it, the CAD-based renders of the Galaxy A54 were leaked just a few days ago.

From the outside, the phone looks exactly like the premium Galaxy S23 series, specifically from the back. Like the standard S23, the new A54 is set to come with three individual camera cutouts. That gives the phone a very premium look. 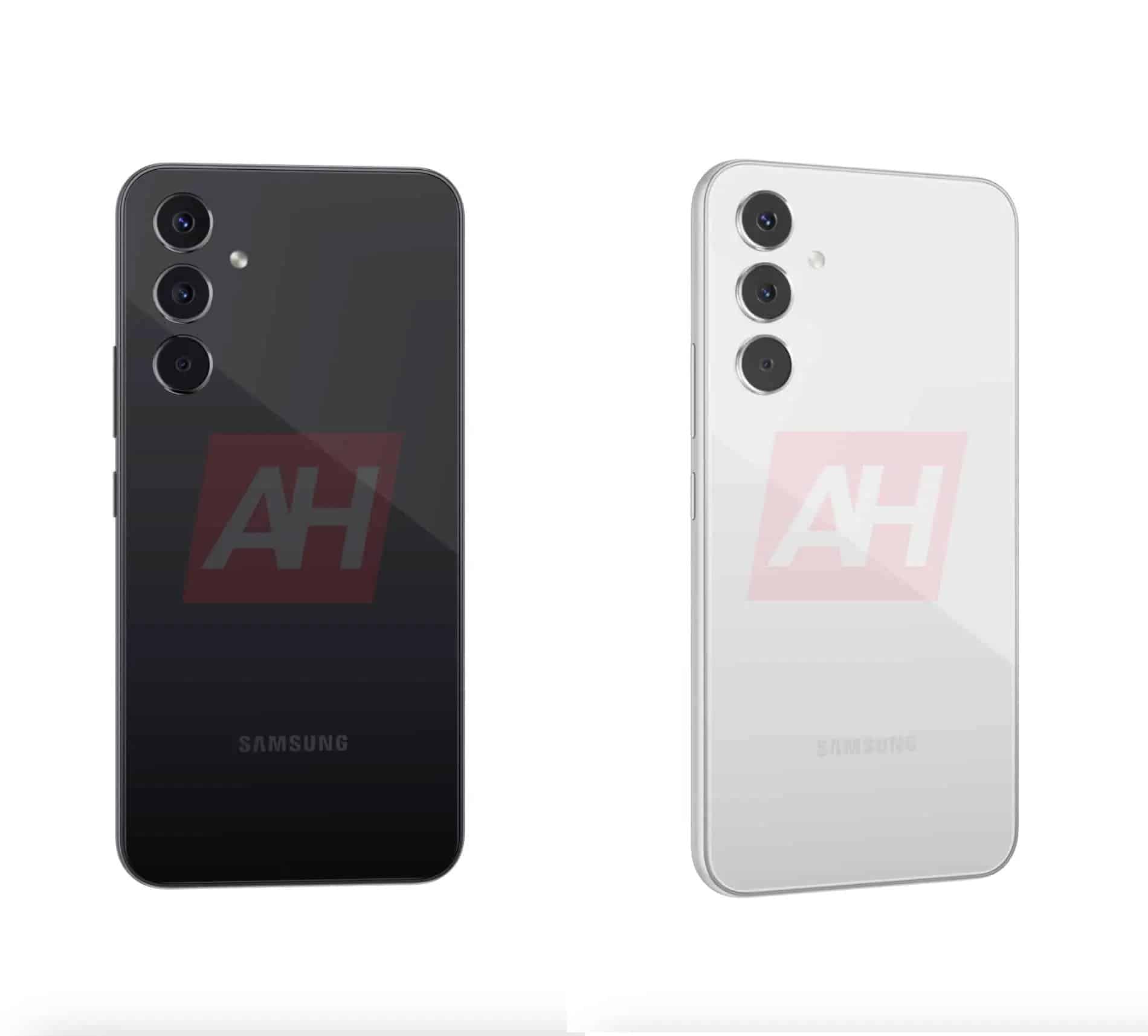 In fact, if you take a look at the official promo pictures of the upcoming S23 series, you might not tell whether the CAD renders were for the Galaxy A54 or the standard Galaxy S23.

Nonetheless, the new renders provided by Android Headline show that the Galaxy A54 will come in two new shades. One of them is watery neon, while the other is a shade of purple. And if you asked us, those two colors of the A54 are more attractive than the standard black and white color options. They will really get a lot of attention if you rock them without a case. 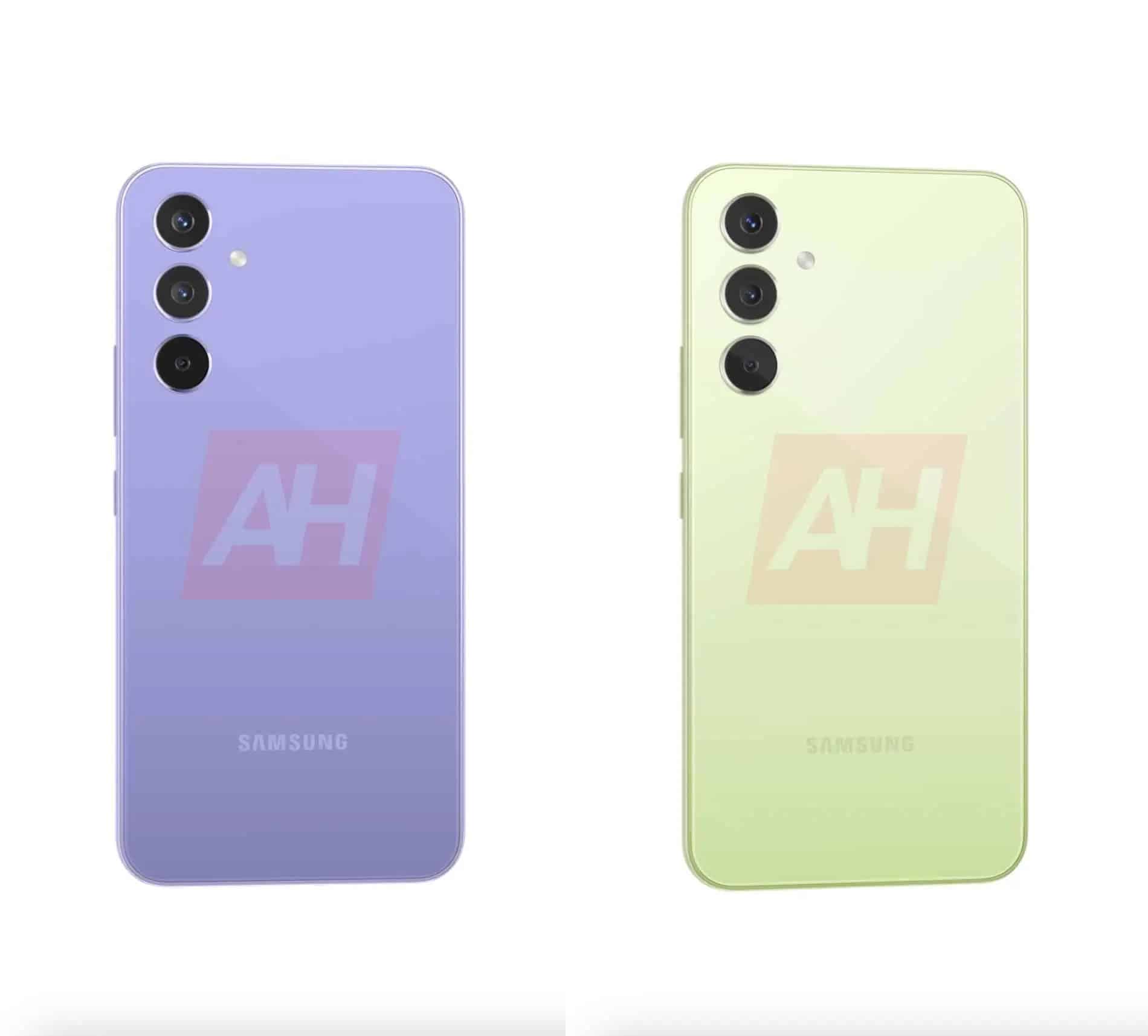 Expected Specifications of The Galaxy A54

Besides images, we also got details about the things you can find under the hood of the new Galaxy A54. According to Yogesh Brar, a reputable leaker, the A54 5G is set to come with a 6.4-inch FHD+ AMOLED screen that can run at 120 Hz. It will be available in 6 GB and 8 GB RAM, while the storage options will be 128 GB and 256 GB.

We expect to see a 50 MP primary camera with OIS on the back. It is rumored to be paired up with  12 MP and 5 MP secondary image sensors. And on the front, the Galaxy A54 is rumored to come with a 32 MP selfie shooter. 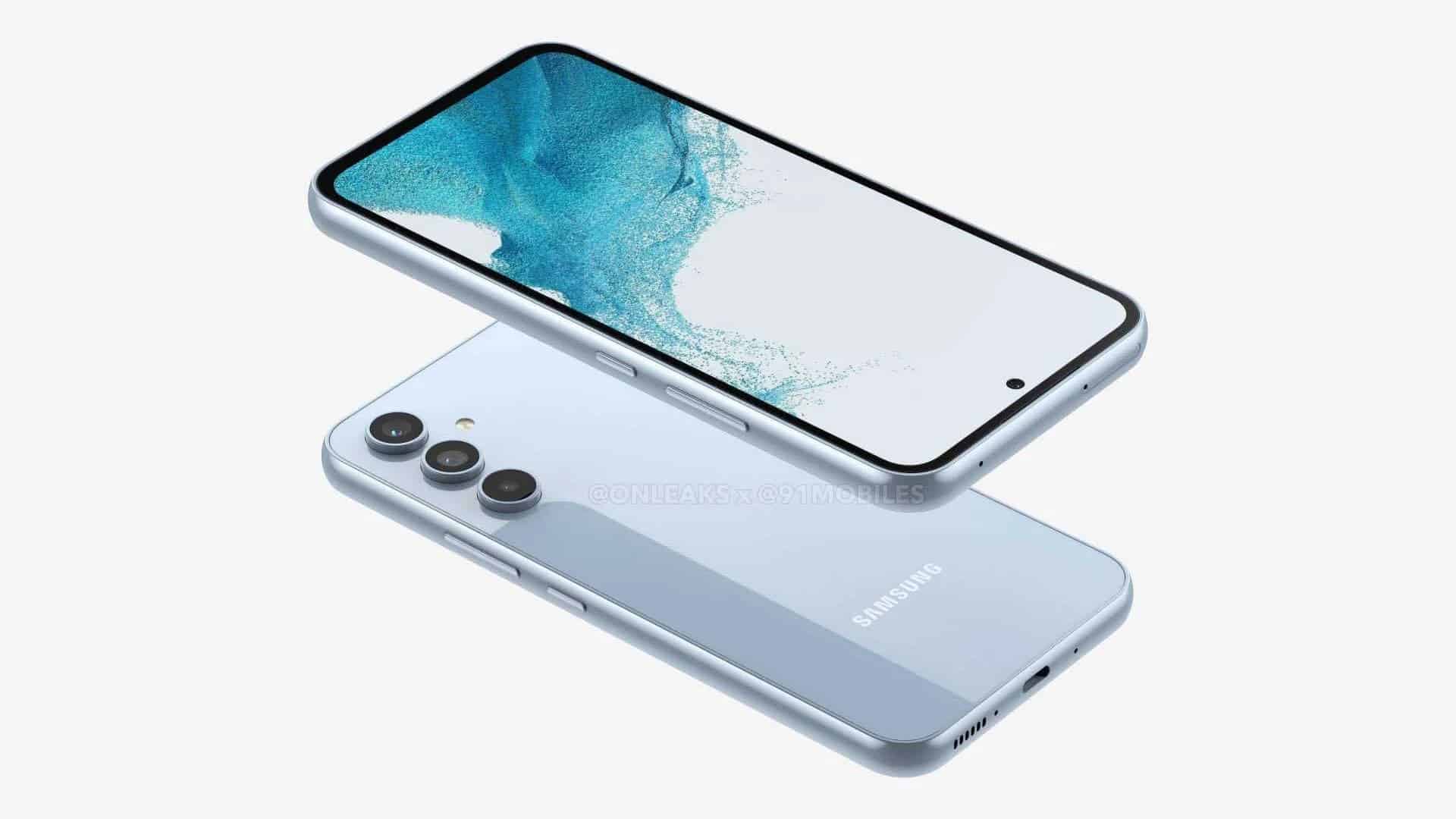 From what the leak states, it seems like the Galaxy A54 will not disappoint in terms of battery life either. The leaker suggests that it will pack a 5000 mAh battery, which will support 25 watts of fast charging. And one of the highlighted features would be an IP67 rating, which is generally reserved for flagships.

Besides, the phone is tipped to come with Android 13, One UI 5.0, and an optical in-display fingerprint reader. Wondering what the Galaxy A54 will be powered by? It is said to sport an Exynos 1380 SoC. And the good news about this SoC is that it is expected to offer several upgrades over the Exynos 1280 found on the Galaxy A53.

A Proper Replacement for The Galaxy A74?

Samsung is expected to ditch the Galaxy A74 this year. That means that the Galaxy A54 will be the headline of the A-series. And considering the fact that the A54 looks pretty much like the standard Galaxy S23, it is off to a good start.

Not to mention that the vibrant color options will surely make it stand out in Samsung’s portfolio. Now, all that is left is to see is how the Exynos 1380 SoC performs. The A54 will definitely be a worthy purchase if it offers great mid-range performance.

Previous GTA 6: Rockstar may officially reveal its game this year

Next Meizu has a new owner! Will it bring back the glory days?