Rugged smartphones are worth considering to stay connected and productive in the outdoors or in harsh environments. If you want to pick up a premium flagship for the new 2023, but don’t want to spend a fortune, then you’ve come to the right place. Here’s where to find the best rugged phone deals this January. Of course coming from Ulefone.

Ulefone, one of the top rugged phone manufacturers, is marking the new year with a massive JANUARY SALE on its official AliExpress store. You can find great discounts on a range of amazing devices there. Including Ulefone’s newest flagships for 2023, the Power Armor 19 and Power Armor 18, as well as the most talked-about models for 2022, the Power Armor 18T and Armor 17 Pro. Now, without further ado, let’s check out the key information and best deals below.

The January Sale will run from January 9th until January 13th on AliExpress’ Ulefone Official Store. Don’t forget to use the extra “Spend & Save” discount on AliExpress, so you can enjoy US $9 off on some of the sale models. This is a limited-time sale that will last only 4 days. Make sure not to miss it ! 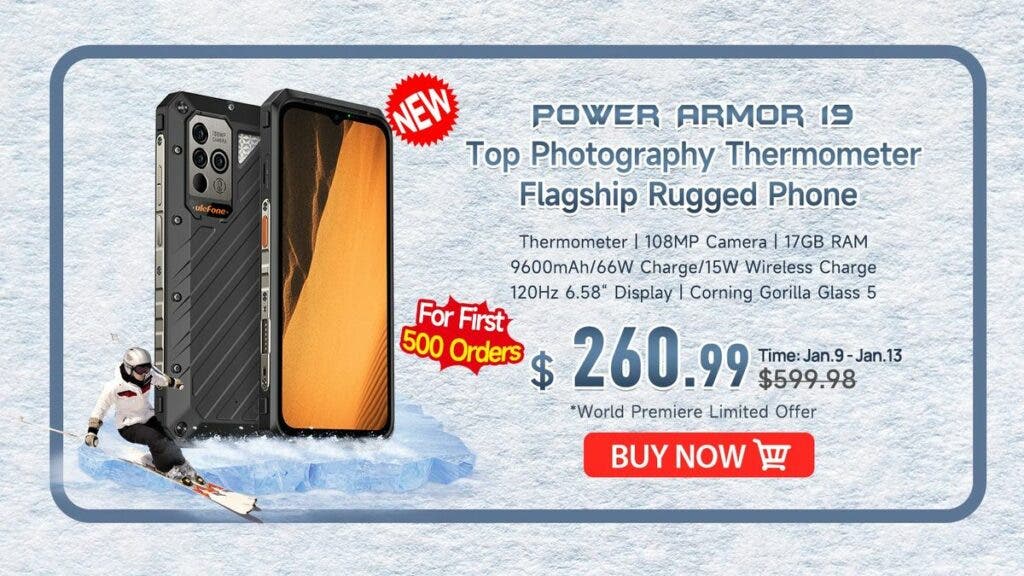 Ulefone has sliced $238.99 off this latest Power Armor 19 rugged smartphone, that is powered by a MediaTek Helio G99 6nm processor. It packs 12GB of RAM and 256GB of internal storage, and additionally it supports 5GB of virtual RAM and up to 2TB of microSD storage expansion. The phone is extremely durable with IP68, IP69K, and MIL-STD-810H certifications. It sports a 6.58-inch FHD+ display with an ultra 120Hz screen refresh rate and a 240Hz touch sampling rate. The Corning Gorilla Glass 5 is used for protecting the screen from shocks or scratches from daily life as well.

As for the cameras, the 108-megapixel main camera is strikingly advanced for next-level mobile photography. Which is complemented by a 5MP 60x super microlens camera and an 8MP ultra-wide camera. The 16MP front camera is also great for taking selfies or making video calls. The Power Armor 19 has a huge 9600mAh battery, which is paired with 66W superfast wired charging, 15W wireless charging and wireless reverse charging. Even better, the stock Android 12 is installed on this device for an ad-free user experience. And what’s special about it ? It comes with instant temperature measurements of the body, objects, and environment. This is a really great pick for only $260.99. If you’re looking to try a higher-end rugged phone for the first time. 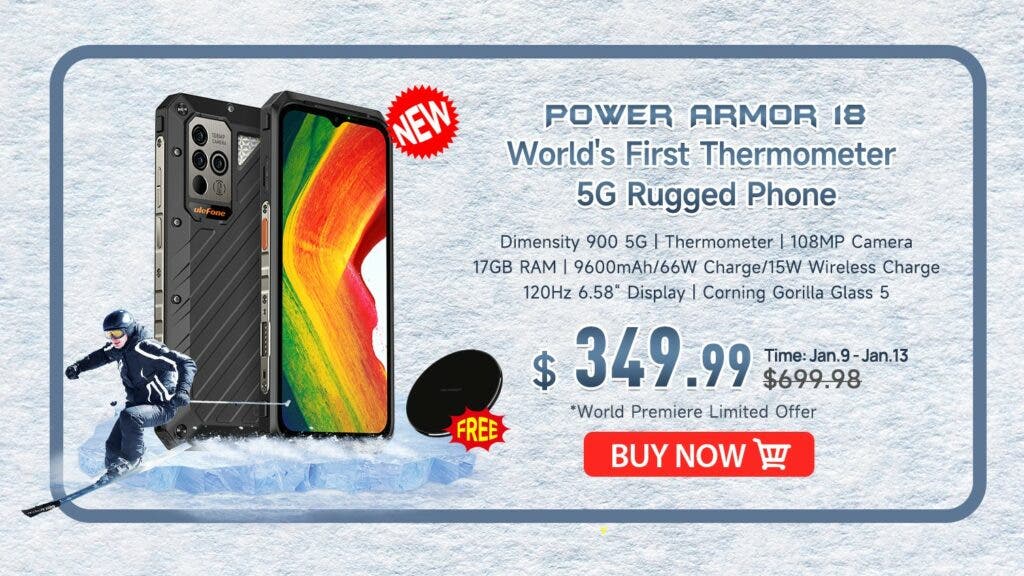 A step up from the model above, this Power Armor 18 flagship has been slashed by a whopping $458.99. The phone has the same design and most of the same specs as the Power Armor 19. Except it boasts a 32MP HD front camera and a better MediaTek Dimensity 900 6nm Soc with support for 4K video capture and faster 5G and WiFi 6 connectivity. And more navigation systems are supported globally. Including L1+L5 GPS, GLONASS, BeiDou, Galileo, QZSS, and NavlC GPS. It’s a more powerful option for $340.99 right now, plus a free wireless charger pad. 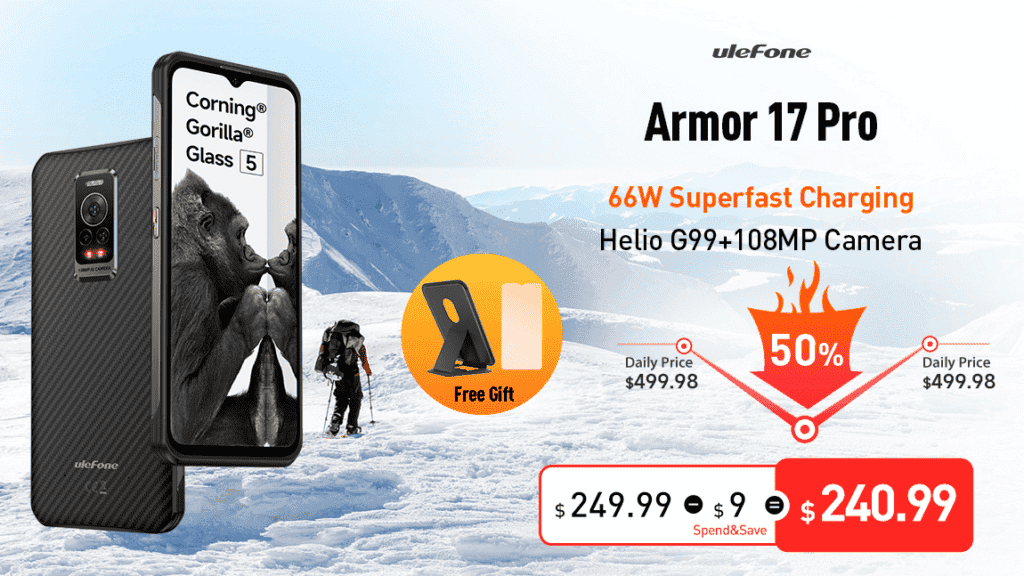 The Armor 17 Pro is a stunning flagship released in November 2022, that combines design, durability, and performance with 108MP photography. Its 8MP infrared night vision camera will be very helpful for specific uses. It’s a great choice for those looking for a lightweight device. The phone is slim and weighs just 290g, which is much less than the average 400g of rugged phones. It’s powered by a MediaTek Helio G99 6nm chipset paired with 8GB of RAM and 256GB of built-in storage. It also provides support for 5GB of virtual RAM and up to 2TB of microSD storage expansion. The 6.58-inch FHD+ display with a 120Hz screen refresh rate enables comfortable viewing and smooth operation on it. And 66W superfast charging would save you a lot of time charging the device. The final price can be $240.99 plus a free magnetic card wallet stand and tempered glass screen protector. 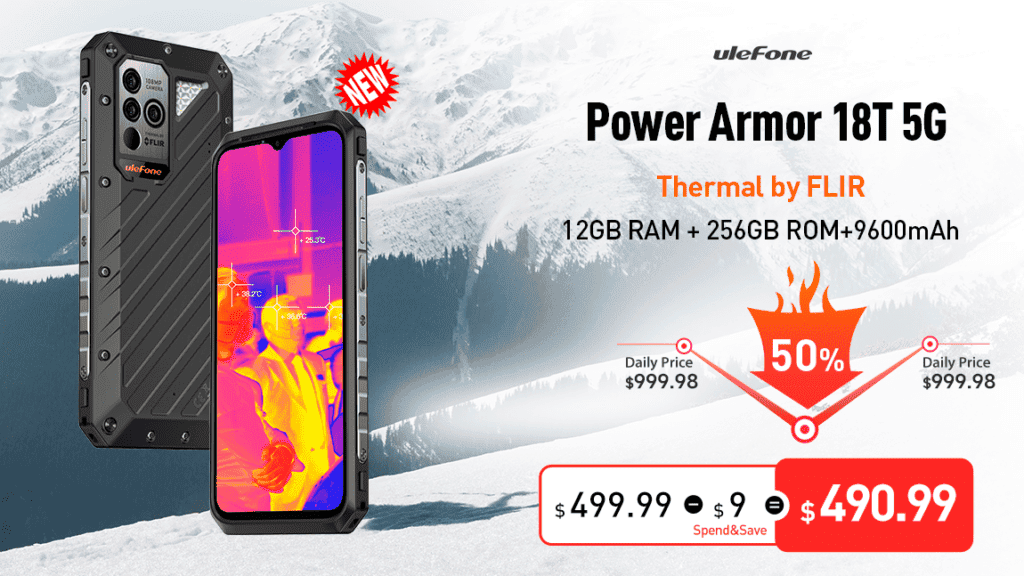 On the hunt for a powerful thermal imaging smartphone? The answer is right here. The Power Armor 18T offers an outstanding combination of durability, functionality, and performance. It incorporates a professional-grade 5MP thermal imaging camera, backed up by FLIR’s Lepton 3.5 sensor and patented MSX technology. As the name implies, the 18T is the advanced thermal imaging version of the Power Armor 18. And the final price can be just $490.99 in the January Sale.

Another highlight is the Armor 12S. This phone features a 6.52-inch IPS LCD display, MediaTek Helio G99 6nm chipset, 8GB of RAM and 128GB of built-in storage. You also get a 16MP front camera and three rear lenses, that include a 50MP main, an 8MP ultra-wide, and a 2MP macro lens. It’s based on the stock Android 12 system. For convenience, wireless charging is supported. And the final price can be $170.99, which makes the phone a great bargain considering its specs.

The Power Armor 13 has always been selling well. No wonder, as it is equipped with a 13200mAh mega battery, 33W fast charging, a 6.81-inch FHD+ display, a respectable 8GB of RAM and 128GB/256GB of storage, an advanced 48MP main camera, and infrared distance measurement up to 40m. In addition, it’s capable of connecting with the endoscope to facilitate your on-site work. Ulefone is now offering $229 off the 256GB version and $259 off the 128GB version on AliExpress.

Previous iQOO U6 appears on TENAA with modest specs