Earlier this month, Realme confirmed the arrival of the Realme GT Neo 5 as its first smartphone with 240W fast charging. Rather than being just a beefed mid-range phone, like the first generations, the Realme GT Neo 5 will compete in the entry-flagship segment. It will be a strong rival for the Redmi K60, and in fact, will have similar specifications. According to the reports, the new phone will reach global markets during the MWC 2023 in Barcelona. Ahead of the launch, the phone was spotted at the Geekbench benchmark, which confirms some of its details. 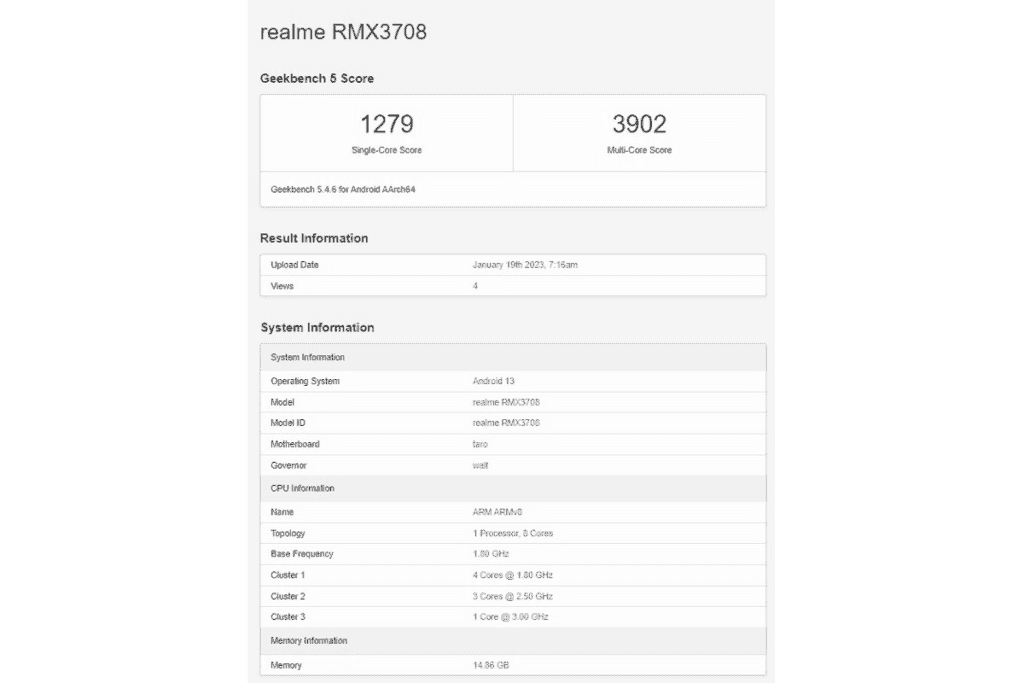 Since the Realme GT Neo 5 is come to compete in the flagship territory, it will boast the Snapdragon 8+ Gen 1. Apparently, the mid-year flagship SoC will still be present on a lot of smartphones in 2023. The phone is inside the Redmi K60 and in a lot of phones in this category. The upcoming phone passed by the Geekbench carrying this exact chipset. The phone achieved 1,279 points in the Single-Core department, and 3,902 in the multi-core score.

This Realme GT Neo 5 variant has 16 GB of RAM. We assume this is the highest configuration. However, we can’t discard another option with 12 GB or even a base model with 8 GB of RAM. If the base comes with 12 GB, then it will be better than the Redmi K60 which starts with 8GB. The smartphone’s model number is RMX3708 and runs Android 13 straight out of the box. The Android version is not exactly a surprise, but we expect the phone to come with Realme UI 4.0. The latest Realme skin is slowly reaching Realme phones but it probably will come straight out of the box with the new flagship.

According to the leaks, the Realme GT Neo 5 will pack a 6.74-inch AMOLED screen with 2,772 x 1,240 pixels of resolution. In terms of optics, the phone will bring a 50-Megapixel main camera. Moreover, there is an 8-Megapixel ultrawide, and a 2-Megapixel sensor for macro or depth. The phone will bring a centered punch-hole for the 16-Megapixel selfie shooter. We also expect it to pack a 4,600 mAh battery with 240W fast charging. The rumors point to another variant with a larger 5,000 mAh battery but slower 150W charging. Some rumors point to up to 1 TB of Internal Storage for the highest model.

We’ll still have a couple of weeks ahead of the MWC 2023, so we expect more leaks to pop out ahead of the event.