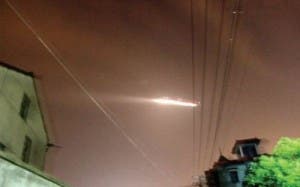 We’re a bit late with this bit of news (don’t worry we’re trying to get back to speed!) but locals in Hangzhou spotted this UFO late last week. From the 2 shots we’ve seen it looks like it could be a rocket shaped craft or a giant iPhone 4!!  Witness accounts describe the object as looking like, the soon to be scrapped, U.S Space Shuttle. While the pictures and witness testimonies don’t seem to quite tally the mystery appearance of the Iphone shuttle edition was of concern enough to close the local airport and clear airspace for a short time after the 3 minute ‘visitation’.