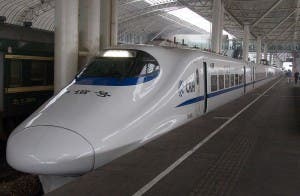 With Shanghai property costing ridiculous amounts of money, many workers choose to commute in the the metropolis from outside the urban sprawl where prices are more realistic.
From October however even residence of nearby Hangzhou can realistically consider commuting to and from Shanghai on a daily bases.
The high speed express train will commence testing in 2 months and will cover the 160km worth of track in less than 40 minutes at speeds of up to 350Km/h!