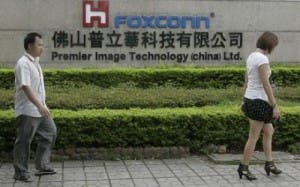 The 100 million U.S dollar facility will primarily be used to make iPhones for Apple according to sources close to the factory.

The current production line is only a temporary site and is manned by more than 500 volunteer workers from the infamous Foxconn Shenzhen facility.
Work on the permanent plant located several kilometers from the temporary location will start on August 20th. Once completed, a year from now, the site will produce more than 200,000 iPhones per year.

Previous Shanghai-Hangzhou In Less Than 40 Minutes