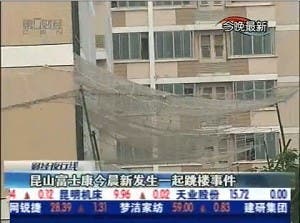 Foxconn are back in the public eye again after yet another worker has committed suicide! The victim was a 22 year old female who worked packing plastic at the iPhone makers Kunshan factory.
Apparently Miss Liu jumped early in the morning on August 5th but got caught in the safety nets which had been erected earlier this year to try to prevent employees taking their own lives. Although originally thought to have sustained minor injuries Miss Liu passed away later at hospital.
Source Micgadget

Next PMP’s Getting all Ainol!