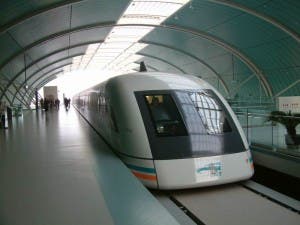 A Japanese – Chinese mud slinging match is currently underway between Japan’s  Central Japan Railway and the Chinese Ministry of Railway’s.
Both China and Japan are trying to ‘wow’ international customers with their high speed rail networks in the hope of future business outside their own territories. The mud slinging began when Yoshiyuki Kasai, chairman of Central Japan Railway Co compared Japan’s latest bullet trains to the high tech iPad’s and stating the Chinese Maglev was nothing more than an unsafe toy made from stolen tech. Obviously this ruffled some feathers with the Ministry of Railway’s who released figures proving the maturity and capabilities of the Chinese network which has reportedly clocked over 280 million Km  at speeds of up to 350Km/h.
China have big plans for rail, and are currently planning a 1000Km/h bullet train, which runs in a vacuumed tube for reduced friction.