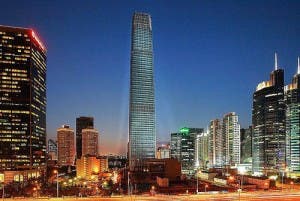 Not only is this 330 meter tall building currently the tallest building in China’s capital, but is also has a mighty long name to go along with it.
The (deep breath) ‘China World Trade Center Tower III” has been completed in 3 stages , hence the “III”. Stage 1 of the build was commenced construction way back when I was knee high to a grass hopper in 1985 and opened in 1990. Stage 2 was finished in 1999. This the third stage was finished back in June of 2005, but only opened officially this week.
The 1.14 million square meters of tower block will house business recreation centers.

Next Shanda To Bring It’s Games To iPhone and iPad