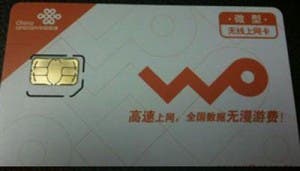 On 1st September, China Unicom began listing and selling Micro Sim cards, a day later however and the emergency brake had been applied halting sales of the tiny Sim.
Sources claim that the listing was a mistake and the new standard of Sim shouldn’t have been released until later this month (September 15th) when the iPhone 4 and hopefully iPad are rumoured to launch.
From this ‘leak’ we’ve learned that Unicom will be offering 5 levels of service for the iPad 3G ranging from 50 yuan to 300 yuan a month on a pre-paid basis.
The “China Unicom WCDMA mini wireless network card” pictured here is said to be a special iPad only sim, which will default to the 80 yuan per month service giving the user a 1Gb data limit. More data can be added through the month if needed by ‘topping up’ at China Unicom branches.